Laura Marshall worked in conference production for nearly 20 years before she finally took the plunge and decided to try her hand as a crime writer. A Curtis Brown Creative novel writing course followed, and then she wrote Friend Request. Here a debut novel, with its Facebook-related theme was bang on the zeitgeist, became a bestseller and was shortlisted for a couple of awards. Now the innovative author is back with her second standalone, Three Little Lies, also a psychological thriller and which we reviewed here. We caught up with her to uncover the story so far… 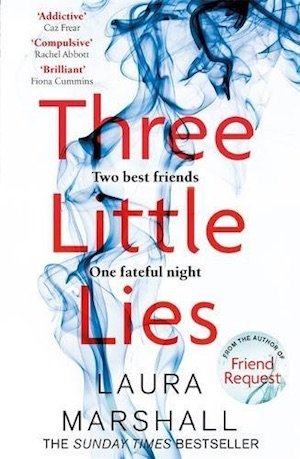 Can you tell us a little bit about Three Little Lies?
It’s about a young woman called Ellen whose best friend, Sasha, goes missing. The police are not taking it seriously, but there’s something in their shared past that means Ellen is right to fear for Sasha’s safety. When they were teenagers, Ellen was obsessed with Sasha and her glamorous family until a brutal attack changed their lives forever, culminating in Ellen and Sasha giving evidence at a trial. Like Friend Request, Three Little Lies jumps between two time periods – the present, and 10 years ago when the main characters were teenagers. What really happened back then, who was lying, who is lying now and where is Sasha?

What prompted you to write crime fiction?
It’s what I have always loved to read, ever since the day I picked up my first Agatha Christie as a teenager. I devoured crime fiction after that, but it wasn’t until I read The Memory Game by Nicci French in the late 1990s that I realised you could write crime fiction from the point of view of someone other than the detective, someone who was part of the story. I was never going to write anything other than crime fiction – I wouldn’t know how!

Where do you get the ideas for your books?
It can be anything – a newspaper article, an overheard conversation. Friend Request started with me thinking about Facebook and how weird it is that you get contacted by people from your past who, if not for social media, you would never have heard of again. It was also informed by my own teenage experiences, although nothing so awful and dramatic as what happens in the book!

I got part of the idea for Three Little Lies from listening to my husband talk about a family he knew as a teenager. They were this bohemian, musical, middle class family who seemed very exotic to him. I’ve always liked reading coming of age stories where a teenager falls under the spell of a glamorous family, and I really enjoyed writing those parts of the story. I also enjoy toying with the reader, making them try and work out who is lying and including plenty of red herrings.

My third book, which I’m writing now, was partly inspired by a Radio 4 programme I listened to in the bath a couple of years ago. Usually something sparks the seed of an idea, and then my twisted imagination takes over. 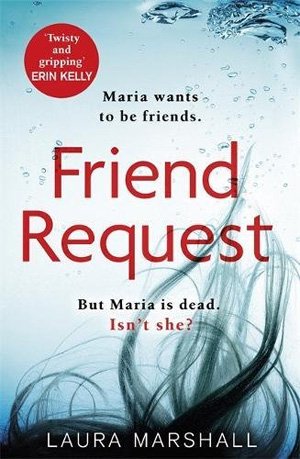 Your teenage characters in particular are hugely realistic. How do you get into their heads?
I actually don’t find this hard at all. Even though I’m in my 40s, my teenage years in some ways feel like yesterday. I can remember very clearly how it felt, how the highs are so high and the lows completely devastating, when your friends are everything. For Friend Request, I did read back through my teenage diaries as well, which was interesting.

How do you write? Are you an obsessive plotter? Someone who has to write a set number of words a day?
I do plot, although not obsessively. I find it helpful to have a basic outline to follow, but my characters will often surprise me by doing something that wasn’t in the plan. I also like to aim for a word count, but that doesn’t mean I will always hit it …

Who are your favourite crime writers?
Agatha Christie of course, as I mentioned, and Nicci French. I also love Ian Rankin, Sophie Hannah, Sabine Durrant, Erin Kelly… I could go on.

Friend Request was a big hit with readers. Was it difficult to come up with a second book?
Yes! I agonised for ages about this. Obviously it was absolutely wonderful that Friend Request did so well, but it did mean I was under pressure to come up with something good. I had a few false starts before settling on the story that would become Three Little Lies.

Social media played a huge part in your debut – do you think it helps today’s authors?
Yes, definitely. It connects you with readers and potential readers, and enables readers who have enjoyed the book to tell other people about it. I don’t think it’s hugely helpful for authors to bang on constantly about their book and how great it is, although a certain amount of self-promotion is unavoidable. Twitter has been great for me as I’ve met other writers on there who are at the same stage as me and we’ve formed a really supportive little gang, where no question is too stupid. There is a downside too, though. It can eat time if you’re not careful, and also it can make you prone to comparing yourself unfavourably with other writers which is the route to despair.

What’s next for you?
I’m delighted to say that I’m writing book three. I can’t say too much about it as it’s at an early stage, but it’s another psychological thriller, centred on a woman whose life has been defined by a tragic event she witnessed as a young child. When she moves back to her home town, and meets the journalist writing an article about this event, she begins to realise that everything she thought she knew about that day might be wrong – a realisation that puts her in danger.

Read our reviews of Friend Request and Three Little Lies.