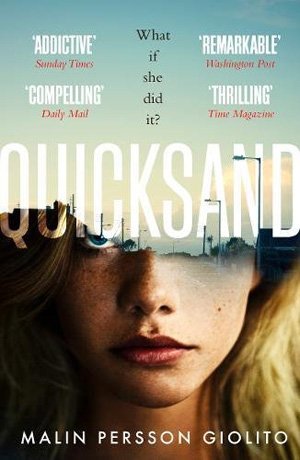 Written by Malin Persson Giolito, translated by Rachel Willson-Broyles — Colorado, Las Vegas, Florida – mass shootings are seen as an American phenomenon, but eight years ago Norway witnessed one of the worst such events and it is a Scandinavian book that is one of the few crime novels to explore the subject. Störst av Allt was the biggest selling non-fiction work in Sweden last year, and won a slew of accolades including the Petrona Award at CrimeFest in 2018 and a Prix Polar Européen too. Netflix is making a screen adaptation, and the translation – Quicksand – has just arrived in paperback.

There’s a very fine line between jumping on a sensationalist bandwagon and actually tackling the subject of mass shootings objectively, and author Malin Person Giolito hits that mark with accuracy, peeling back the layers in a precise and unhurried fashion.

Our narrative begins in a classroom, where things at first appear normal, until it dawns that the picture doesn’t quite fit. There’s been a catastrophic event and only one person is left unscathed… And soon we are in a courtroom where we meet 18-year-old Maja, who is standing trial on a number of charges connected to what happened in that classroom, nine months ago.

Several people died in the shooting at a school in Stockholm, including teacher Christer and a number of pupils. Among them were Maja’s best friend Amanda, and Sebastian, who was Maja’s boyfriend and the person who did most of the shooting. Their relationship was complicated. In fact, as you’ll discover, nothing about this story is straightforward. We see everything through Maja’s eyes as she wages an internal battle and gradually, gradually, reveals the motivations behind that terrible act.

Although a terrible tragedy has occurred, you are spared most of the blood and gore, and as the events unfold, our emotions ebbing and flowing with Maja’s as her introspections take flight. This is not a book for the action thriller fan but the slower pace suits the subject matter and offers a unique and hugely authentic insight into the mind of the modern teenager.

The narrative jerks between the developing court case and Maja’s memories of what happened on that fateful day, interspersed with her recollections of the things that led up to it. Throughout these backward glances you’ll meet and begin to understand the characters and motivations of dipsy Amanda who was Maja’s BFF, Samir, Dennis, Christer, an assorted cast of parents and lawyers, and the mercurial Sebastian, whose inner demons led him to make some tragic and ill-conceived decisions. It’s a whole range of little things falling together in an unfortunate way that made him snap, leading to the mass murder.

The court scenes are almost low-key in their staging, in such a contrast to the atmosphere in Thirteen by Steve Cavanagh, for example. That book really comes alive in the cut and thrust of the legal battle, but Quicksand takes things slowly – to the point that you’re occasionally mentally urging them to get on with it. Maja is at the centre of it all and she is so beautifully portrayed that you feel her every mood shift. You may not come to love this character, but you’ll almost certainly feel a growing admiration for her.

The court’s verdict, when it finally comes, is almost incidental in a crime book that tends towards the literary in style. A tip of the hat to Rachel Willson-Broyles for her sensitive, perfectly poised translation.

Another of the best recent crime novels set in Stockholm is The Dying Detective by Lief GW Persson, who is Malin Persson Giolito’s father. Or take a look at our top 10 Nordic noir novels of 2017.