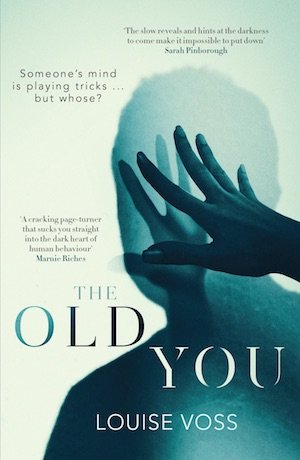 Written by Louise Voss — You certainly can’t accuse Louise Voss of not having her finger on the pulse of things. Over her 18-year writing career and 11 novels, she has tackled, either on her own or together with writing partner Mark Edwards, plenty of unusual yet always topical subjects. In Catch your Death it was unethical medical research, post-divorce dating in The Venus Trap, bone marrow donation in Lifesaver and even boyband fans in The Blissfully Dead. All the fears and traumas of modern life are handled in a sensitive manner and become part of the story, not serving as a mere inert backdrop for a conventional tale of murder or kidnapping.

The Old You is very much in this mould. It starts off like a domestic drama about a middle-aged couple. Lynn’s husband Ed is diagnosed with early onset dementia and suddenly their happy life together just outside London and joyous retirement plans come crashing down on them.

So far so normal, but dig a little deeper, and we see that Lynn and Ed’s marriage was built on fragile foundations. It is impossible to say much more here without giving away the surprises, but suffice to say that Ed’s first marriage ended in tragedy. When Ed starts forgetting words and misplacing things, Lynn cannot help comparing this diminished version of her husband with the charismatic man who captured her heart ten years ago. Memories resurface, some of them quite different to how she had originally remembered them, and sinister things start to happen.

Those who like fast pacing and big bangs might struggle with how gradual the reveal is, but this is like putting a lid on a simmering pot. There is no sudden single twist, but a steady unpeeling of layer after layer of the story, like an onion, so it’s best to allow the book to work its magic on you. The first few chapters had me wondering if this was indeed a suspense novel, but the pace certainly picks up towards the end of the book.

In a crowded psychological thriller market, there are two things which make Louise Voss’ books stand out. The first is the authentic and completely believable female voice. Lynn is neither a victim nor a superwoman – she is a sensible everywoman with good qualities and flaws just like the rest of us. She is intelligent, non-apologetic, but still full of insecurities and anxieties. Although she made friends under false pretences, her friendships are sound, so there is less of that ‘lone woman in danger in remote location’ scenario so popular in domestic noir, and which do not sound at all plausible to many women once they have passed their early 20s.

The second element is precisely that link to everyday topics which can crop up in all of our lives: aging and mental health, and how a marriage can cope with both. In many ways, a domestic set-up is a pretext for the story in a psychological thriller, but Louise Voss has the talent to weave just enough details to make it informative and touching, rather than a disposable bolt-on to set the plot in motion.

A memorable read, with characters who are sometimes uncomfortably close to real life.

We have also reviewed the excellent From the Cradle by Louise Voss and Mark Edwards. For the ultimate in domestic noir, try Gone Girl by Gillian Flynn.