We Were the Salt of the Sea 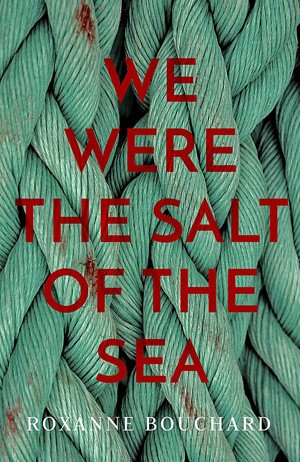 Written by Roxanne Bouchard, translated by David Warriner — In a world filled with high-octane, fast-paced, blood-spattered crime fiction, it’s sometimes worth taking the foot off the gas pedal and plumping for something a little less frenetic. Something like Roxanne Bouchard’s We Were the Salt of the Sea, for example. It’s the award-winning French-Canadian author’s fifth novel, but her first to be translated into English.

Not only does this book offer a break from the norm in terms of pace, it’s also set in an area little visited by crime works – the Gaspe Peninsula in Quebec, Canada. Towns here are quiet and insular, and the locals go about their day to day lives little troubled by what’s happening outside their borders. Their existence is governed by the seasons and – an ever present, fickle mistress – the sea, and its many moods. Two incomers are about to cause ripples in that calm outlook.

The first is tourist Catherine Day, who arrives in the remote fishing village of Caplan from Montreal. Ostensibly she is on holiday but in reality Catherine has other fish to fry… She carries with her a letter posted in Key West, Florida, two months ago. Who is it from and what are the contents? And why is she so interested in Marie Garant, a local woman who spends much of her life at sea on her little sailing boat, Pilar? The very mention of her name seems to rub the locals up the wrong way – then Marie is found dead, drowned, trapped in the nets of one of the local boats.

That’s where newcomer number two comes in. DS Joaquin Morales arrives in town just as the body is being hauled up from the deep. His intention is to get his new home set up before the arrival of his sculptor wife, Sarah, from their old home in the suburbs of Montreal. But those best laid plans are soon cast aside when his new boss demands he immediately start investigating the Garant case. Morales quickly realises he is out of his depth. The locals seem loath to share any useful information with him and suddenly, his wife seems less than enthusiastic about the move to Gaspe. As his confidence ebbs away, the previously top-notch detective begins to make silly mistakes. Is he really the man for the job?

Catherine and Morales are at the very heart of this tale, but they’re surrounded by a cast of quirky, affectionately rendered and wholly believable characters who vie to grab your attention – think Anne Tyler meets Fargo. You’ll fall in the thrall of this endearing motley crew of locals – fishermen, cafe owner, priest – each with their own unique vocal tic. ‘Christ in a chalice’ is my favourite. And when you’re in their company, a heady mix of brine and ozone seems to emanate from the page.

Bouchard’s twin skills of spot-on characterisation and razor-sharp description combine to make this a novel that engulfs you, but as the narrative thread is eked out, inch by inch, there’s ample time to sit back and marvel at the poetry of the prose. This book has a lyrical loveliness that put me in mind of Louise Beech’s Maria in the Moon, the crime aspect almost secondary to the myriad dramas revealed by the captivating characters who live and breathe within its covers.

More DS Morales books are promised – which is good news, as this deep-thinking, complex character will make a fine addition to the crime fiction family. It should provide a great opportunity for us to get to know Gaspe, and its inhabitants, better too.