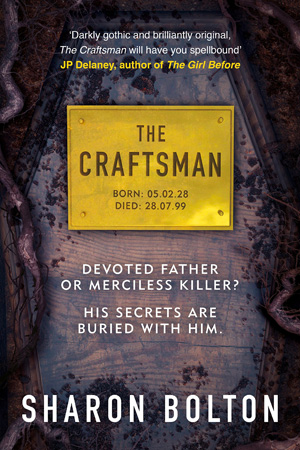 Written by Sharon Bolton — There’s something for everyone in Sharon Bolton’s latest stand alone psychological thriller. There’s crime, mystery, history, drama, neatly executed reveals, witches and even magic. The final two might give you pause, but the hint of occult and mythology fits well into this highly enjoyable read.

Prepare to be transported to the fictional town of Sadben, in deepest, darkest Lancashire. In the shadow of Pendle Hill to be precise, a place that has magic in its very stone. It was, after all, home to the Pendle Witches, men and women hanged for witchcraft in the 17th century.

This tale begins in 1999, in Sadben, where Met Assistant Commissioner Florence Lovelady is attending the funeral… of a former funeral director. She’s not come to mourn, rather to check that Larry Glassbrook is finally, irrevocably deceased. And as the locals gather to spit on his coffin, she realises that emotions still run high, even though 30 years have passed since Glassbrook was convicted of the murders of three young people, buried alive alongside the dead body to whom the casket really belonged.

Back in 1969, Florence was WPC Flossie Lovelady, fresh out of police college and battling a tsunami of distrust and discrimination. As a female, southern, posh, former university student there’s no way Lovelady is ever going to fit in ‘oop north’.

It is a dark time for Sabden. The local teenagers have disappeared without trace, the police are floundering and, not so many years after the Moors Murderers were apprehended, tensions are running high.

Lovelady is surrounded by solid, if somewhat plodding, fellow officers. But she’s someone with a bit of spark, keen to show initiative if only someone will give her the chance. Instead, she’s sent out on the beat and when she’s back in the station she is treated as a glorified tea lady. It’s so frustrating! Then Lovelady has a brilliant idea – why not broadcast a reconstruction of the last sighting of the latest victim?

It’s the first of many innovations suggested by the newbie WPC. All are ground-breaking, and all are greeted with scepticism by her male colleagues. A leap of faith sees her ignoring orders and digging up a recently filled grave. What she discovers blows the investigation wide open…

There are a great many elements to this fascinating novel. First and foremost there is  Florence, and how she was treated back in the late 1960s. Anyone who has seen the TV series Life on Mars will recall the casual sexism shown to female police officers, and Bolton sits it firmly centre stage as this story unfolds. Even the name Flossie is an indication of how low down the pecking order the WPC is, and, like so many things, Florence hates it but learns to live with it. She is regarded as a mere woman and not up to scratch as far as actual police work is concerned, but boy, does that assumption get blown out of the water!

It’s an interesting juxtaposition that WPC Lovelady is so badly treated when, in Sadben and the surrounding area, women are, quietly, flexing their muscles. You’ll meet some formidable females during the course of this book. Their shadowy presence, and those of the missing teenagers, lurk in the background, offering a fleeting glimpse of ‘something’ out of the corner of your eye…

Sounds spooky? Good, because the otherworldly aspect of The Craftsman is a compelling one. Unlike, say, Sarah Pinborough’s Behind Her Eyes, it fits right in here and adds something to a narrative that is likely to already have you in its thrall.

As the action skips between 1969 and 1999, it becomes clear that both Sabden – and Florence – have never really moved on from what happened back then. It’s a place that thrives on secrets and when some of those secrets are in danger of being revealed, the tension ratchets up another notch. You need to be in it for the long haul with this one – it’s a book that will put you under its spell… literally.