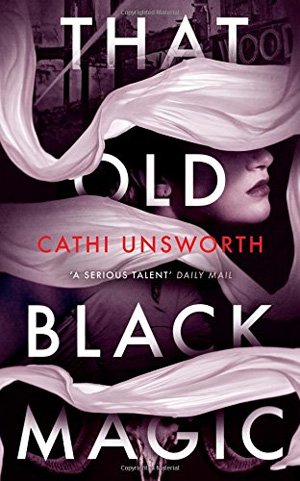 Written by Cathi Unsworth — Another music-related title for a Cathi Unsworth standalone book, and this one had me in its spell from early doors. Like Without The Moon – which we reviewed in 2015, it is set firmly in World War II.

Open this eye-catching and slightly spooky cover, and you’ll find yourself in early January, 1941. Daily Herald reporter Hannen Swaffer is heading across a snowy London to attend a seance where Scottish psychic Helen Duncan is the star turn. She doesn’t disappoint, producing what appears to be a stream of ectoplasm from her mouth and channeling a message from a young woman called Clara before collapsing, fighting for breath and apparently choking. Who is this Clara, with her faint West Midlands accent and a slight lisp on the letter W, and what was her fate? Swaffer is intrigued.

So too are the spooks of MI5, particularly when Duncan makes an appearance at a seance in Portsmouth, where she summons the spirit of a young sailor who has perished, along with many of his shipmates, on a sunken ship. Since news of this sinking has not been released to the public, what seems like fairly harmless smoke and mirrors becomes a matter of national security. It is true that as people on the home front struggled to cope with the vagaries of war spiritualism grew in popularity and some unscrupulous folk saw it as an easy way of making big money – so is Duncan a fraud, a traitor, or both?

But let’s return to the story of the mysterious Clara, an apparently spectral figure who proves to be a vital part of many of this story’s myriad threads. There’s German spy Karl Kohl, parachuted into East Anglia on a mission which, he hopes, will reunite him with the woman who has captured his heart, the beautiful Agent Belladonna – a dream shattered, along with his ankle, when he lands badly. And Anna Hartley, talented musician and avid collector of folk tunes, who goes into hiding when her performance partner Clara Brown disappears. At first she seems an innocent, but is Anna to be trusted? Most important of all, however, is policeman turned MI5 agent Ross Spooner, pulled away from more menial duties and tasked with learning more about Clara.

Spooner is a fine creation and his quest is both intriguing and engaging. He is the son of a bookshop owner and has a wide knowledge of Witches, Warlocks and Wizards. After a series of bombing raids which cause huge devastation to important targets in Birmingham, he is sent to the war-ravaged city to hunt for the elusive Clara, believed to have been the person who directed the bombers so accurately to their targets. Spooner takes the disguise of a theatrical agent and his surprising transformation adds a welcome bit of light-heartedness.

The claustrophobia of Britain in a blackout is a fine backdrop for a tale with dark deeds at its very heart. Unsworth creates her settings with a bold assurance and there might even be times when you expect to hear an air raid siren at any moment. Period and place are evoked perfectly in this book. It’s a long, long time before Clara is discovered but the journey is well worth making. The mixture of seances and spells and wartime espionage is a heady one and it kept my attention throughout. There are whiffs of the supernatural which reminded me of the work of Dennis Wheatley, but cold reality wins through in a book which is not much inclined to flights of fancy.

The author provides a copious list of sources which encouraged me to do some further reading on the subject. As I began to sift the truth from the fiction, I was shocked at how much of what I’d dismissed as being a little far fetched actually happened, including similar seances and claims of ghostly apparitions. Do not worry, though, this novel does not rely on otherworldly explanations to its mysteries. In fact, it has a ring of truth about it because much of what happens within its pages is based on real life occurrences. Hannen Swiffer, Helen Duncan and a number of other incidental characters lived and breathed – and Duncan’s story in particular seems particularly dramatic by today’s standards.

For more wartime crime, try John A Connell’s Ruins of War or take a look at our feature highlighting some of the best of World War I crime fiction.