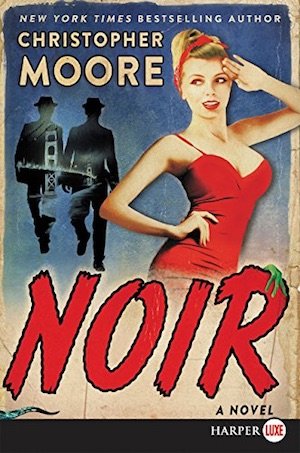 Written by Christopher Moore — Bestselling author Christopher Moore has carved out a niche for himself as a prominent satirist. His novels span multiple genres and he has poked fun at everything from vampires in Bloodsucking Fiends and Bite Me: A Love Story to Shakespeare with his absurdist novel The Serpent of Venice. Expectations are high for his pastiche of the noir genre, which is simply titled Noir. It sounds like fun – so let’s see if it lives up to the hype surrounding the launch.

The book opens in San Francisco in 1947, and Moore has fun with this post-War setting. He is a native of the city and it shows in how lovingly he handles the locale. The fog is described as “damp, cold, smelling of salt and diesel” laying across the city like “a sea-sodden streetwalker who’s just bonked a tugboat.” The lines are clever, but maybe they lack the zing and brilliance of the heavy hitters of noir that Moore is satirising.

Sammy ‘Two Toes’ Tiffin finds himself smitten when a woman named ‘Stilton’, or ‘Cheese’ as he calls her, walks into the bar where he works. She brings with her a certain amount of trouble, but it is not enough to scare Sammy away.

Sal, the owner of the bar, comes in one night with General Remmy, a man on leave from Roswell who is hanging out in San Francisco. Remy has linked up with a group called The Bohemians and is planning a camp-out at their infamous Bohemian Club, a hedonistic playground for some of the world’s richest and most powerful men. Sal and Remy are looking to infiltrate the club with a gaggle of women on their arms in order to impress its members. Sammy is commissioned by the pair to find them some female company and goes through with it for fear of losing his job.

The novel crawls along after the initial set up, meandering through scenes that lack the humour you want from a genre mockup. Sammy’s sidekick brings some overdrawn comic relief – a Chinese man named Eddie Moo Shoes, who delivers some of the better one-liners. But the solid noir tone of the opening begins to fade.

Noir moves between Sammy’s narration, another mysterious first-person narrator, and a third-person perspective. Although the purpose of this narrative trick is made clear later on, most of the time it is distracting. The book does have a lot of good tough guy dialogue capturing the banter style of the James Cagney area, but this gets lost in the third-person sections.

All sorts of kookiness crops up the deeper you get, but Noir can’t decide how to actualize. It’s not incredibly satirical, nor is it a straight-up noir novel. As well as Sammy, Sal, Cheese and Eddie Moo, you’ll meet Lone Jones, a black boxer who insists he isn’t black; a hard-talking, hard living kid simply called ‘the kid’; a crooked cop named Pookie O’Hara, who always surfaces at inopportune times; and a series of gangsters. They’re all the characters you expect to find in a book like this.

The second half is much more action-packed than the first as things come together. Cheese and Sammy fall for each other just as she gets sucked into the bohemian scene and Sammy attempts a rescue. Moore resorts to off-colour humour at times, in an attempt to play up the 1940s setting. Remmy’s Roswell connection seeps in for the last part of this romp, taking things to the brink of absolute absurdity.

Ultimately, noir is disappointing. Moore has finally attempted to satirise the genre after playing with it here and there in other works. But for a sendup to really work, it must capture and in some ways surpass the genre it adoringly mocks. Noir doesn’t manage to do this. Fans and anyone looking for something zany might enjoy it, but noir is a lot of work for not a lot of laughs.

For more humorous crime fiction try The Good Theif’s Guide to Vegas by Chris Ewan, The Run-out Groove by Andrew Cartmell or The Day that Never Comes by Caimh McDonnell.

By Paul Burke
Good gonzo noir is a perpetual car crash; one bone-crunching, metal-shredding impact after another and Nick Kolakowski’s pulp fiction upholds that tradition. Meet Bill and Fiona. Don’t let their ordinary names fool you, they are the harbingers of chaos. Where they tread, and they tread…
Features