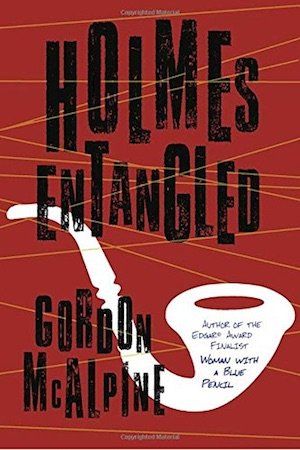 Written by Gordon McAlpine – Holmes Entangled is a great title for this complex metafictional novel. Nominally a private detective mystery with a host of familiar characters, it is about as far removed from the original Conan Doyle canon as it’s possible for a Sherlock Holmes story to be.

Holmes Entangled begins, and finishes, with the visit of Jorge Luis Borges to a Buenos Aires private investigator in 1943. He possesses a manuscript of such value and metaphysical importance that an attempt has been made on his life. Found in the dusty cellars of the Miguel Cane Municipal Library, the document provides the bulk of the book’s narrative, and apparently it was written by Sherlock Holmes himself.

The text takes us back to 1928 and Holmes has long since given up detection. But he is not retired to the Sussex countryside to keep bees as Watson would have us believe. Craving anonymity but still needing to keep his prodigious intellect active, Holmes has impersonated a number of successful foreign academics and taken up visiting lecturer posts in England’s best universities. He is disguised as Heinrich von Schimmel, a historian of classical physics at Cambridge, when he is called upon by Conan Doyle.

In this telling, Conan Doyle is not the detective’s creator. Holmes is a real person as is his chronicler Watson. Conan Doyle is merely the ‘middling scribbler’ of The Lost World. We know that in real life Conan Doyle developed an interest in spiritualism, and it is this that brings him to Holmes’ door. Doyle has seen something extraordinary at a séance. Rather than being visited by a ghost, the group saw an apparition of the prime minister of the day, Stanley Baldwin. Doyle claims this Baldwin was different, that he was crippled, and that he carried a private message. Baldwin, Doyle claims, told him of Holmes’ secret identity. Since the séance, Doyle has been blackballed by the spiritualist community and even shot at. Doyle wants Holmes to get to the bottom of things, and Holmes agrees to take the case. He has no interest in the séance, convinced that a simple fraud has been committed, but is very keen indeed to know who has discovered his identity and what their purpose is in exposing him to Doyle.

Holmes is aided in his investigation, initially against his will, by his old housekeeper Mrs Hudson, who by now Watson’s widow. The mystery takes them to the home of the medium Madam Du Lac, across the channel to a secret bookshop in Paris that is both never open and never shut, and into the silent rooms of the mysterious Diogenes Club. Author Gordon McAlpine weaves a number of famous fictional and historical people into his plot including the Baker Street Irregulars, Mycroft Holmes, Edgar Allan Poe, Le Chevalier C Auguste Dupin, and Baudelaire. In a deft touch the author even has Schrödinger’s Cat play a pivotal role in the solution to the mystery.

How much you enjoy Holmes Entangled will depend very much on how you consume your crime fiction. Do you want to read a novel that takes such broad liberties with the canon? Quite apart from the metafictional elements noted above, the character of Holmes is changed from a slightly irascible Victorian gentleman into a more atavistic predator who sees criminals as his prey.

Likewise, this is not a thriller. There is little action or peril, and it is not a suspenseful book. The pleasure lies in the narrative journey, and the thematic diversions that are pursued, rather than building to a climax at the end. Those themes are rich and rewarding; McAlpine explores the nature of fiction – how it deceives as well as informs – ageing, and regret at missed opportunities. I found it engrossing, and for all its complexity, surprisingly easy to read.

Gordon McAlpine is no stranger to weaving a real-life writer into his fiction, as previously seen in Hammet Unwritten. For more metafiction you should also try The Word is Murder and The Good Thief’s Guide to Vegas.

By DeathBecomesHer
Former CNN journalist Sarah Sultoon has won awards for covering major stories across the globe. But in her first foray into crime fiction writing she sticks closer to home, with a tale centred firmly in the British establishment that’s set in the late 20th century…