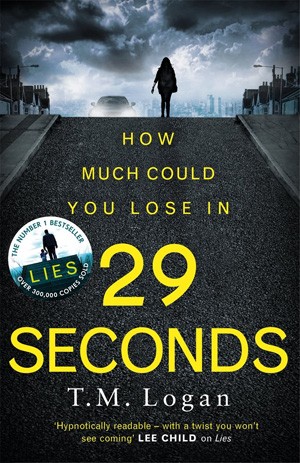 Written by TM Logan — Paying it forward is all the rage these days, whether it’s giving an unexpected gift to a neighbour, coughing up for a stranger’s cup of coffee or simply offering your seat to someone on the bus. Sounds like a nice, simple thing to do – unless, that is, the concept is explored by the twisted mind of a crime writer…

Sarah Haywood is driving home after the day from hell at work when she gets stuck in a traffic jam. She’s already late to pick up her kids and is starting to panic when she witnesses what appears to be an attempted abduction of a young girl. Her actions help the child to escape and she reports the incident to the police, but they have no record of any child missing and dismiss Sarah’s claims.

But someone was watching, and that someone wants to say thank you for a good deed done on the spur of the moment. Paying it forward was never more threatening… The mysterious Volkov is the father of the little girl that Sarah helped he wants to repay her in his own special way. Just say the word, and he will make someone disappear… permanently.

Sounds preposterous, right? But Sarah is sorely tempted. She is an academic on a temporary contract at Queen Anne University in London. Her boss is Alan Lovelock, well known presenter of the BBC TV series Undiscovered History and author of the books that accompany the programme. He is seen as something of a cash cow for the university and is therefore untouchable. He’s even known, unofficially, as the ‘bulletproof prof’. A bit ironic when he is such an obnoxious obnoxious, sexist, misogynistic sexual predator. And Sarah is in his sights. He has the power to make or break her career and the pressure is building on her to comply to his demands, or be ruined.

Sexual harassment in the workplace seems to be the pet topic for crime fiction this year. We’ve already had Anatomy of a Scandal, now say hello to 23 Seconds. That title, in case you are wondering, refers to the time it takes Sarah to make the phone call which will change her life. What happens next is certainly unexpected and, at times, verging on the downright absurd.

TM Logan found success with his debut novel, Lies but this second work has some issues. Lovelock is an odious character, someone you wouldn’t want be in the same room with, and he has a history of treating his female co-workers abominably. So why don’t they just band together and go to the authorities? There’s a throwaway mention of Operation Yewtree at some point in the book and as a TV personality he would surely be fair game with both the tabloids and the police force?

Then there’s Sarah herself. She suffers all kinds of indignities at the hands of her boss, whinges to her friends but just keeps on taking it. She is a bright and intelligent woman with a burgeoning career and two young children whom she adores, but her dithering began to get on my nerves and I itched to give her a good talking to.

Luckily, at the point where I was about to consign this psychological thriller to the ‘did not finish’ pile, Logan adds a twist which gave me a ray of hope and I stuck with it to the bitter end. Overall the story proceeds at a somewhat plodding pace until a couple of corkscrew moments that take the story in a new direction. Both are cleverly executed – but they are too little, too late to redeem the book completely. It’s an interesting idea, but not one that’s destined to stay in the memory banks for very long.

Looking for some crime time? How about 13 Minutes by Sarah Pinborough or Four Days by Iain Ryan.