Gallery of the Dead 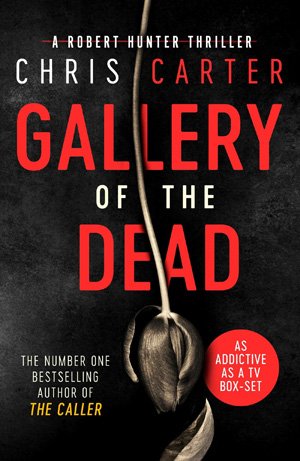 Written by Chris Carter — Slipping inside the pages of a Chris Carter book is like entering a chamber of horrors. This is one dark, twisted, crazily imaginative and highly entertaining writer, so be prepared to jump at any slight sound as you engross yourself in his prose.

Fans of Carter’s work will be expecting a parade of uber-gory deaths, described in vivid detail – and they won’t be disappointed. However, things start off at a slower pace, with Los Angeles model Linda Parker coming home to her cat and a large glass of wine after a long day at a number of photoshoots. She’s a fan of Instagram and decides to try out a new face swapping app for a selfie with her feline friend, Mr Boingo. But what she spots in the resulting image sets Linda’s alarm bells ringing… Yep, it’s never too long before Carter ratchets up the tension a little.

Elsewhere, Detective Robert Hunter of LAPD’s Homicide Special Section – an elite team created to handle serial and high-profile murders – is about to give a lecture to psychology students at UCLA when his phone starts to ring and he has to abandon his attentive audience. Soon he is at the home of Linda Parker and meets his partner Detective Carlos Garcia. What they find inside shocks them to the core. There, in a blood plastered bedroom, lies the model’s skinned body, minus hands and feet, her back bearing a chilling message. The freezer in the kitchen holds another macabre discovery.

As the investigation begins, Hunter has the feeling that this wasn’t the perpetrator’s first kill, and the arrival of a pair of FBI agents proves that his hunch is bang on the money. With them is Adrian Kennedy, Director of the National Center for Analysis of Violent Crimes, and what he tells Hunter and Garcia takes the case to a whole new level.

Don’t you love it when the author of a popular series throws a new ingredient into the mix? Special Agents Larry Williams and Erica Fisher join Hunter and Garcia in their search for the elusive murderer they dub The Surgeon, but there’s no love lost between local and federal law enforcement and the thinly-veiled animosity makes for some great exchanges, particularly between Fisher and Garcia, providing some light relief from the unremitting darkness.

If you’ve met Robert Hunter before, you’ll know he’s a pretty special character. If not, then let me explain – Hunter is highly intelligent, hugely intuitive and an insomniac. He likes to get inside the head of the criminals he pursues and his sudden, inexplicable flashes of insight are what will eventually crack the case, if Williams and, in particular, Fisher, allow him to follow his own peculiar way of working, that is. The addition of these sceptics adds a frisson of the unknown – what if Hunter isn’t allowed to plough his own furrow… what happens then?

The foursome travel the country as the search for The Surgeon intensifies, and the ebb and flow of the investigation as first one theory, then another and another is put forward and then smashed to smithereens, is fascinating to follow. Everything seems set for a rip-roaring finale, but it was at this stage that I had my ‘whaaaat????’ moment. Suddenly, after all the carefully constructed build up, there appears a denouement that seems just too pat for a book as complex and carefully crafted as this one. I was left feeling a little confused and cheated – a pity after such an eventful and enjoyable journey. On the plus side, the final pages hint at another Robert Hunter tale to come.

This is the ninth book in the series and we’ve previously reviewed The Caller. If serial killers float your boat, take your pick from our 10 of the best.