The Grantchester novels by James Runcie are moral fables with a nod to the tradition of classic crime, mixing together mystery, comedy and social history. Set in a Cambridgeshire village between 1953 and 1977, the Grantchester stories are more than that, though – they are about the mystery of the human heart, faith, love and death. In the Golden Age of crime fiction the whodunit was both the genre, and what every reader wanted to try and work out. It was about reading, but also about solving a puzzle. Grantchester is more a whydunnit than a whodunit and the stories are driven by the characters, rather than plot. And the themes in books, such as Sidney Chambers and The Problem of Evil, and Sidney Chambers and The Forgiveness of Sins, cannot be described as cosy.

James Runcie is the son of the former Archbishop of Canterbury, Robert Runcie, who died in 2011. He has often said his father was an influence for Canon Sidney Chambers, the principal character of the six Grantchester books who has a sideline in sleuthing. The series has been so popular, that it was made into a TV series by ITV, with James Norton playing Sidney Chambers and Robson Green as Detective Inspector Geordie Keating.

As well as a writer, James Runcie is a director and literary curator, a Fellow of the Royal Society of Literature, visiting professor at Bath Spa University and the commissioning editor for arts at BBC Radio 4. At the Theakston Old Peculier Crime Writing Festival in July, we caught up with the author to ask him more about the crime tradition, the human heart and character. 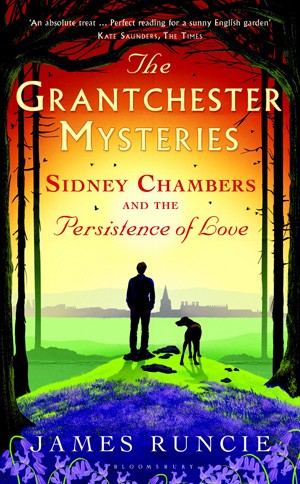 The sixth and most recent Grantchester novel.

Who is Sidney and how did he come about?
Sidney is an Anglican clergyman-detective named after the great 18th and early 19th century cleric Sydney Smith. The recipient of many a secret, but always willing to think the best of people, Sidney can go where the police cannot.

I think my father would have been amused. I wanted in a way to bring him back as Sidney has similarities. I sometimes have chats with him in my head.

I was born in Cambridge in 1959 and am the son of a clergyman so it’s not hard to work out where the inspiration for this series comes from. I think what is startling is how rapidly and how radically society has changed since the 1950s and I thought it might be interesting to combine changing British social history with murder.

Many of the stories concentrate on a moral dilemma; whether it be the revelation (and betrayal) of a secret, the nature of forgiveness, or a troubling conflict of loyalties. The series begins in the 1950s because it gives both writer and reader a chance to think about the consequences of illegality in an age when the death penalty was still in evidence and people were prosecuted for homosexuality. Sidney Chambers is not gay, but he has friends who are, and who are terrified of being found out.

There are several female love interests. And there is the harassed local Cambridgeshire policeman, Detective Inspector Geordie Keating and the housekeeper Mrs Maguire, so almost an ensemble cast. Sidney also has a dog, a loveable Labrador called Dickens

It’s easy to think of Grantchester as written in a classic style with elements of cosy crime, but is that just because it is set in the 1950s?
I think all crime writing is written from within some kind of tradition. Whenever you write a story, even if it is set now, there is a limited number of stories available to you, whether it’s burglary or betrayal or blackmail. So I think you are always writing with this tone of the past and you either go with it or against it. You have to realise you are working with a tradition, then contribute your own version of it.

The trick in my world is to write something that is both historical and modern simultaneously, so you write about betrayal or homosexuality, which I write about quite a lot, and it says something about the time, but it also says something about now. I think one of the key things about crime fiction is what it does it tests its characters in the most extreme way. You might be able to test them in literary fiction, but in crime you are seeing how they behave against a background of violence, betrayal, disappointment and desperation. The key is to see how characters react in the furnace or crucible of that kind of atmosphere.

Why did you chose the 1950s to begin the series?
Because I wanted to tell the story of our time. I was born in 1959 and writers often write about just before they were born in order to understand the history. I have written before about the the decade as it just strikes me as very strong, the way in which after the war there was a great movement to decide what country we wanted to be. It was the 70th anniversary of the Edinburgh Festival this year and I live in Edinburgh. The first festival was built on what does peace look like? How can we build a health service? How can we build better housing? Should we abolish the death penalty?

A crucial thing is that it is almost 25 years of social history from 1953 to 1977. You see at the end there is no death penalty, homosexuality is legal, women have much greater career opportunities and what does that growing liberalism mean? How does society change and what does modern Britain look like? I did think when I started this that we have moved from a situation in which we built a better Britain to the situation in which people just strive to be famous. Now I think we have moved on so that kind of desire for social justice is really on the march again. I am very interested in that. 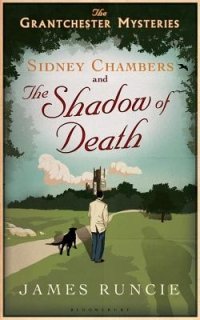 In 2012 we reviewed Sidney Chambers and the Shadow of Death.

You said earlier that the series is exploring themes of faith, love and death. Please explain more?
The church deals with the rythym of the seasons and religion. In a secular society people only go to church three times – for a Christening, a wedding or a funeral. More people are connected to the church through these moments than in the rest of their lives. They are often brought up short and I am really interested in this. At a funeral they don’t know what to say, at a wedding they don’t know quite how to behave in the church because they are so unused to it. In 1970 you might do it every week. People get thrown by the service and the language. In Sidney’s day they would be more familiar with the rituals of the church. For example, they would know how to pray against the perils of the night and say the Book of Common Prayer twice a day.

Father Brown was written in the end of the 19th century but the BBC moved it to the 1950s, just before us, for their series. Father Brown was Catholic so he can’t marry and my world is the Anglican world. If you write off the opportunity for sexual ambiguity or unresolved sexual tension, you are cutting off a whole area of writing. I really like writing about women for a variety of reasons, but one is complexity. The complexity is very different in my view, from that of men. They pronounce and think they are projecting the whole iceberg and underneath you don’t know what is going on, whereas women are complex all the time. They are much more interesting.

Do you have some favourite classic crime books and authors?
It’s complicated. Greek tragedy is crime, Oliver Twist you could argue is a crime novel, Great Expectations, Tess of the D’Urbevilles, so I am more interested in that kind of crime fiction. Most great writing has crime in it. That’s what I look for, I can’t really do hardboiled. I am more interested in the intricacies of character than plot. I think it has to be about the human heart. Fiction has to be more than a conjuring trick about people’s lives. Plot must be secondary to character. I am also interested in incredible prose. So for me, the greatest living writers are Hilary Mantel and Marilynne Robinson. Neither of them are crime writers, but their prose is so luminous and they are the writers I look to and think: ‘I can’t do that. I’ll stick to what I know.’

What is your audience demographic?
People might think it is a BBC Radio 4 demographic, 50-plus, but I just signed a book and a woman asked me to sign 4 to 94. I asked why and she said her four-year-old watches it and her grandmother. The whole family watches it, which I thought was wonderful. It is not deliberately targeted. You might think a certain group or people who have faith, but you don’t have to have faith to read it either. Sidney is there for everyone.

If contemporary crime fiction written with a classic approach interests you, read our interview with Nicola Upson, whose Josephine Tey books are set in the 1930s. Grantchester begins with Sidney Chambers and the Shadow of Death, which you can purchase below.

By Erin Britton
First published in 1937, the same year that ECR Lorac was elected a member of the prestigious Detection Club, These Names Make Clues is a cerebral detective story that is perhaps the most in keeping of all Lorac’s books with the conventions of the Golden…
Features