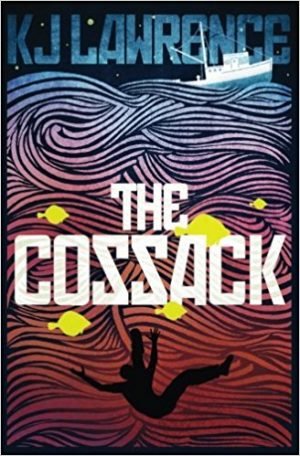 Written by KJ Lawrence — Though this debut espionage thriller kicks off with a murder in winter 2014, it’s not the usual intercontinental bloodbath. In fact, in a nice twist, the killer – a Russian hit man named Mikhail Petrov – is having serious second thoughts about his choice of career. He regrets the string of corpses he’s left in his wake, and is weighing the likelihood he could change occupations without himself becoming a victim of the SVR – the heir to the KGB. With the death that opens this book, at least he gets what he came for: a set of 18th century banking documents.

Mikhail is an ethnic Russian who grew up in Ukraine, and his victim is a young Ukrainian named Ivan, working in London as an assistant to noted photographer Daniel Brooking. A few days after Ivan’s disappearance, Daniel receives an envelope of documents relating to a financial transaction during the American Revolution. Still, he’s not too worried about the young man’s whereabouts.

Ivan’s friend Anthony Graves is. Anthony works for a super-stealthy interagency unit of Her Majesty’s government, tasked with coordinating security and intelligence information. Anthony brokers a meeting between Daniel and the agency head, which confirms Daniel’s growing fear that Ivan is dead. Finding out what really happened to Ivan becomes a truth mission. With Ivan’s papers in hand, Daniel begins to dig.

Across town, Mikhail Petrov likewise studies the papers he took from Ivan. Though Ivan had cleverly divided his resources, both sets of documents converge on one location, a bank headquartered in New London, Connecticut. Mikhail travels there, and finds Daniel a half-step ahead of him. KJ Lawrence is a debut author, but the shifts between these two characters’ points of view work well. They’re well-rounded, believable, interesting, and temperamentally different from each other. Daniel may be the novel’s main character, but Mikhail is more sympathetic than you’d expect and has considerably more skills for dealing with the hazards they eventually confront.

Daniel secures the help of Isobel Harding, curator at the New London Historical Association. You can almost smell the dust on the half-forgotten legend they uncover concerning a fortune in gold. What could this far-fetched tale have to do with modern-day Ukraine? Why was Ivan killed for delving into it? A question that does not occur to Daniel at first is whether poking a stick at this particular bear puts him at risk too.

When Isobel is hospitalised after an apparent attack, Daniel finds himself in the New London lock-up with a story too improbable for belief, at least until she wakes up. Not surprisingly, Daniel and Mikhail aren’t alone in their interest in the legend. New London’s police department soon has its hands full with crimes of various sorts and the dubious assistance of a couple of agents of the US Department of Homeland Security (the sole portrayals that approach caricature).

Where the danger lies – from the US government, from the Russians, from the local police? – is unclear. All Daniel and Mikhail are sure of is that somehow they must escape.

Stories of lost treasure have propelled mysteries and excited readers from Treasure Island to today. Nora Roberts’s Whiskey Beach and Robin Blake’s The Scrivener are just two recent examples we’ve reviewed. Lawrence uses this trope expertly by creating a parallel story line involving Ukrainian protests against the Russian-supported government, which peaked in 2014, at the time of this novel.

Ivan’s sister Yana, a physician, is an active participant in Kiev’s independence movement and witnesses violence perpetrated by the Cobra, an elite quasi-military unit of the Ukrainian police. Among the worst of Cobra’s operatives is Vladimir Petrov, Mikhail’s sociopathic younger brother. Yana is poking a bear, too, determined to put an end to the career of Vladimir Petrov and his thuggish compatriots. Although this thread of the story is thinner than the main tale, it provides a real-life grounding and urgency to Daniel and Mikhail’s activities continents away.

The Cossack is a fine debut, with Lawrence a compelling – and compassionate – author who is worth watching.

By Sonja van der Westhuizen
Translated by Sam Taylor — French author Victor Jestin’s short yet forceful debut novel is part dark coming-of-age novel, part morality tale. Set over the span of a weekend, it tells the story of a 17-year-old who witnesses another teenager dying and chooses not to…
iBookKindlePrintReviews