Back Door to Hell 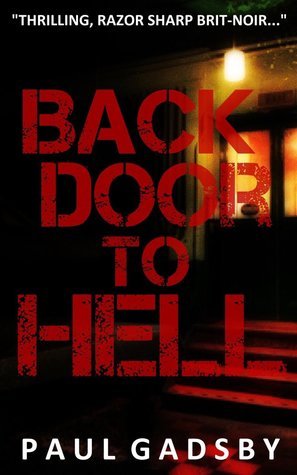 Written by Paul Gadsby — Nate doesn’t have a plan, all he has is first degree burns on the soles of his feet after a run-in with Spanish police, and a debt to a shady criminal boss back home in London that he needs to pay back. But Jen has a plan, a plan to steal the proceeds of the boss’s criminal enterprises, and it’s a plan that she needs Nate’s help with.

Nate Stokes’ younger brother has always been a bit of an outsider, a minor player in a major criminal enterprise, running errands for Crawford. Nate always looked up to him, the way a boy looks up to his older brother, and when they both find themselves out of work and with a chance for a short trip to Spain, they take it. But it doesn’t end well, with a punch-up in a Spanish bar, and the police intervening by transporting them out of town and dumping them by the side of the road with no shoes. With no way back to England, Nate’s brother looks to his old boss, Crawford, to help him out. But when Crawford helps you out, he expects something in return.

In Nate’s case that something is a month of unpaid work in a shady snooker bar. The bar is remarkable only for the fact that it’s the location of Crawford’s irregular stocktakes, where he collects and counts the proceeds of his enterprises, both legal and otherwise. The aforementioned Jen Whittaker is a 19-year-old art student with a jaded outlook, a set of wheels for a quick getaway and a good idea of when these semi-regular stocktakes occur. Nate knows that Jen’s plan is far from foolproof, but when you’re 22 in a Britain crippled by recession and all you’ve got to look forward to is a meeting with a bored job centre employee, the chance at 50 per cent of a huge payout is pretty tempting. So it’s a chance he takes, sure that no one will know until it was too late.

When Nate and Jen think that Crawford won’t care when a substantial amount of his money goes missing, they don’t take into account how fiercely and violently he guards his reputation. You don’t get to be one of the biggest crime bosses in London by letting people rip you off. As Nate and Jen set off in her tiny hatchback they’re never far away from Crawford, who won’t let them escape. The trouble is that Crawford knows everyone in the underworld, and Jen and Nate are going to need some help to get to safety.

Meanwhile Crawford has his own issues to deal with. As well as an autistic son who is the victim of schoolyard bullies and a wife who feels him growing more and more distant every day, his investors and business partners are circling, and somehow they know a great deal about the incident in the snooker bar. What follows is a chase up and down England that rivals the best and tensest heist stories. Not only that, it’s also got a decent cast of characters with a lot of depth – there’s more to this book than just action. But there is a hell of a lot of action.

Back Door To Hell is as tense and edge of your seat as any heist novel, packing a lot into 200 pages plus change. What really separates it from others in the genre is how believable and contemporary it is. Modern-day Britain is full of Nates and Jens, struggling to get by in a recession while the Crawfords of the world take advantage of them. Despite this I find it hard to believe the amount of money involved is worth it. The exact amount is never stated, but it’s small enough for the two of them to carry in bags while they flee. The risks seems completely out of scale with the rewards, and there are certainly a lot of risks in Jen and Nate’s getaway. But there’s not much else to say against this brilliant slice of British noir, which packs a lot of punch and says a lot about modern-day Britain.

For another great heist novel check out Charlesgate Confidential.