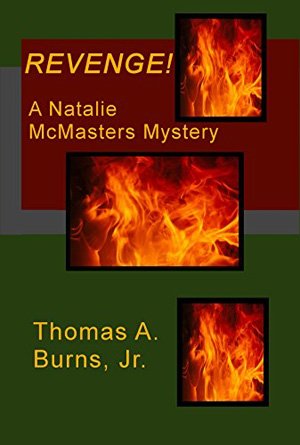 Written by Thomas A Burns, Jr — Revenge! falls firmly into the category of books you’d love if you like that sort of thing. Set in a college in the modern day American south it’s pulp fiction, and unashamedly so. But beneath the pulp exterior it has a lot to say about the modern world, immigration and sexual assault; big issues that are treated with the kind of depth and respect you wouldn’t expect from a book that can be summed up as a lesbian stripper revenge stor’.

Natalie McMasters – Nattie to her friends, when they’re not being short with her – is just shy of her 21st birthday, the age when she can start carrying a concealed firearm. Despite her youth and the fact that she’s still struggling through college she killed several men during the events of the first Nattie McMasters book, Stripper. And she appears to have gotten away with the deaths she caused in the past. Most of them, anyway.

But somewhere along the way she must have made an enemy, because there’s someone out to get her, someone who’ll stop at nothing to make sure Nattie fails. This could mean playing home-recorded sex videos from her past on campus television screens, or getting her undocumented fiancée Lupe and her son deported back to Mexico. It could also mean burning down her old family home and the homes of her friends. Clearly she’s pissed someone off.

Despite Nattie’s wish to protect herself, her overbearing uncle Amos won’t let her carry a weapon without a license. He’s a private detective, and Nattie works as his assistant, doing a lot of the leg work since an attack left him in a wheelchair. The events of the first book, and the resulting PTSD it caused in Nattie, are both well explained, so you don’t have to read Stripper before you pick up Revenge. Nattie is just working through her PTSD with her counselor when the footage of her and Lupe in their heart shaped bed appears on the big screen at her college, bringing memories of her past flooding back. Mr Simonson, the associate director of student conduct demands to see her in his office if she wants to stay enrolled in college.

From there things get worse. Simonson threatens to have Nattie expelled if she doesn’t submit to him sexually, and she storms out of his office, determined to find out who put her video up in the big screens, and why. On top of that, she finds her cat on her doorstep, drugged and disemboweled. Nattie knows that killing small animals is one of the first signs of a serial killer. The second is arson, which happens to Nattie when her birthday party is interrupted by a few Molotov cocktails. There’s a psychopath out to get her, and the police won’t help her. All she has on her side are a shady gang member, a disgruntled ex-cop, and a very attractive counselor. Together they unearth a seedy ring of cruelty and sexual assault hidden in their smallish southern city.

Despite the fact that this is a lesbian stripper revenge tale, there’s not too much in the way of sleaze, or sex at all for that matter. None of the topics are dealt with in a juvenile way, although anyone over the age of about 20 may find the language a bit too cool. This is definitely not a book for everyone, but it doesn’t try to be. If it’s pulp you like, then Revenge is the book for you.

For more crime fiction set in the American south, check out 11 of the best Lone Star State crime novels