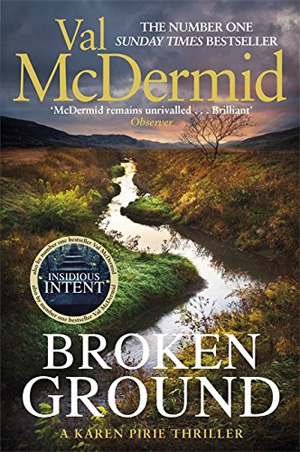 Written by Val McDermid — There’s a reason readers around the world look forward to a new book by the ‘queen of crime’ and Val McDermid’s legions of fans will not be disappointed with this one. This new police procedural is her fifth crime thriller featuring Edinburgh police cold case detective Karen Pirie, who’s not above putting her faith in the value of her work above the priorities of her superiors.

They’re tackling the first, a series of brutal 30-year-old rapes, with recently obtained information about a vehicle that may have been involved. In the second, they’re flouting the rules to stay involved in a current-day situation: Pirie overheard two women in a coffee shop discussing a planned confrontation with the hostile estranged husband of one of them. It was a poor strategy, with a strong potential for violence, and Pirie tells them so. The women are affronted by her intrusion, and as their drama unfolds, Pirie can’t stop feeling she handled the situation disastrously. It’s a testament to McDermid’s narrative skills that the pursuit of these two cases, subplots, really, are every bit as engaging as the team’s biggest and much more tangled investigation.

In an opening scene set in Wester Ross, Scotland, in 1944, two friends bury a pair of large crates in a peat bog in the dead of night. Seventy years later, the granddaughter of one of them returns to the Highlands to claim her inheritance. With her grandfather’s map to the hiding place in hand, she and her husband approach the local crofter, Hamish Mackenzie, a handsome fellow who might have stepped from the screen of Outlander. He gives them permission to dig on his land and agrees to help.

The excavation proceeds smoothly. One crate up: in it, a pristine… well, let’s not spoil it, read the book and find out! They start digging for the second crate, but it seems to have been disturbed – perhaps by the dead man lying on top of it. The body is remarkably well preserved, due to the peculiar physical and biochemical composition of peat bogs. However it came there, it’s obviously not recently, which means the identification and investigation of the death are in the remit of the Pirie’s Historic Cases Unit. The trainers the victim was wearing pinpoint the death to 1975 or thereafter, and he is soon recognised as a regular in the Highland Games, a heavy athlete whose specialty was the Weight for Height event. He would have been hard to fell in a fistfight, but two bullets had done it.

McDermid is much-praised for her brilliant evocation of the places, the mores and the culture of Scotland, as well as the procedures and rivalries within the organisation of Police Scotland. As a result, the atmosphere she creates is believable down to the last wisp of mist. Introducing Hamish Mackenzie as a potential love interest for Pirie, despite her questions about him, adds a bit of spice.

Although the cases Pirie works on are old, the forensics brought into play are fascinatingly up-to-the-minute. DNA analysis, deployed in the rape case, is only one of them. Rapid reconstruction of the bog corpse’s appearance is another. Analysis and enhancement of cell phone contents is yet a third. McDermid, who has a great interest in forensics, likes to get these technologies right, and she gives Pirie a pair of worthy confederates: her friends River Wilde, a forensic anthropologist, and Tamsin, head of a laboratory in Police Scotland’s Gartcosh Crime Centre. They, like she, believe families should not have to wait one day longer than necessary to learn the fate of their loved one.

Though Pirie makes some missteps, mostly with respect to her relations with other police officials, and especially with ACC Markie, McDermid never puts a foot wrong. Her prose is so clear and engaging, this is a book that will keep you turning pages. Like Pirie, you will be hungry for just that one more bit of evidence.

Read our 2015 interview with Val McDermid, and our review of Insidious Intent featuring Carol Jordan and Tony Hill.