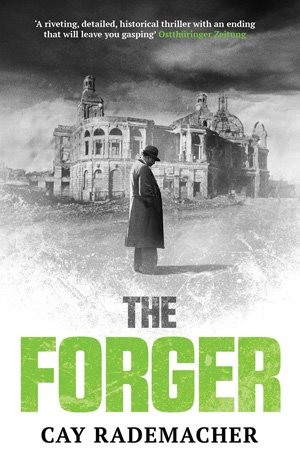 Written by Cay Rademacher, translated by Peter Millar — Frank Stave begins this novel as a chief inspector in Hamburg’s Homicide division. But having been shot during a routine operation he has reconsidered his career and when he is fit to return to work he requests a transfer to Department S, known to the police as the black market squad.

The year is 1948 and Germany is still under occupied by the Allied forces. The reconstruction of Hamburg is hamstrung by a failing economy and rampant inflation. The solution is the introduction of the deutschmark to replace the old reichsmark, but nobody is sure when this will happen or what its effect will be. The head of Department S, Wilhelm Bahr, explains that the black market is likely to disappear after the currency switch, but that the department will likely thrive as they move into new areas of financial crime.

In the meantime, Stave takes his first case. Trummerfrauen, women employed to search the destroyed city for valuables, have discovered a corpse in a bombed-out building. The corpse will go to homicide and is allocated to Chief Inspector Donnecke, Stave’s bête-noire, and a man who he suspects previously worked with the Gestapo but has somehow been cleared by the Allies as fit to continue working with the police. Close by to the corpse are some sculptures from the modern school which are unlikely to been appropriated by the Nazis, whose taste ran to more traditional art.

In theory this should be a simple case to solve for Stave – find who occupied the bombed out building at the time of the raid, and return their art. However, Dr Schramm, banker, art lover, and noted anti-Nazi who risked his business and life to help Jews under the Nazi regime, disavows any knowledge of the sculptures. Stave’s suspicions about Schramm and his concerns about the way Donnecke is investigating the death in the building lead him to carry out his own unofficial parallel investigation into the death.

Meanwhile, Stave is handed another case. Lieutenant MacDonald, a British investigator, has brought him forged bank notes bought on the black market. His concern is that this is an attempt to weaken the proposed new currency before it has even had a chance to be a success. If the public lose faith in the security of the deutschmark, and what better way to achieve this than by showing they can easily be forged, further weakening the German economy.

Such is Philip Kerr’s legacy that it’s impossible to read a crime novel set in post-War Germany without it bringing to mind the late author’s Bernie Gunther. Whereas Gunther was a morally-compromised noirish character, Stave is closer to Chandler’s view of the detective as knight errant. Stave operates with a clear conscience and without any corruption of the soul. What he lacks of Marlowe’s physicality and fast quips, he makes up in thoughtfulness and depth.

Stave’s investigations proceed at a steady pace, and broaden to include past Nazi history – how could they not? – before ultimately concluding. The sedate pace of the book may put you off if you are looking for action but it makes for a nice change and Rademacher gives himself the space to develop his theme of new beginnings. Whether it be the ultimately successful launch of the deutschmark as history tells us it will be, or Stave’s son’s lift out of the despair of defeat to embrace a new life as a student of philosophy, the novel is awash with a sense of optimism – no easy trick to pull off when writing of this period.

The translation by Peter Millar is so unobtrusive that I did not even realise it hadn’t been written in English until I checked the copyright page.

For crime fiction based in Hamburg in the present day, why not take a look at our review of Blue Night from earlier this year?