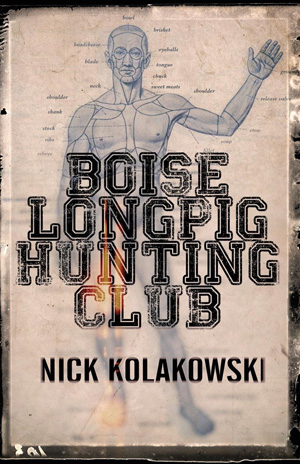 Written by Nick Kolakowski — Idaho bounty hunter Jake Halligan’s relationship with the Boise police force is difficult enough without any extra complications. The police take a dim view of bounty hunters as it is – trigger happy cowboys without the guts or discipline to carry a badge – but when your sister Frankie is an illegal arms dealer, and who knows what else, then you really become unpopular.

So coming home to find your gun safe has been broken into and two rifles stolen is a real bummer for Jake, but still it’s nothing he can’t fix. The culprit turns out to be a local meth dealer, Zombie Bill, and with Frankie’s help the problem is quickly solved.

The second time it happens, however, it’s a much bigger problem. Jake and his wife, Janine, go for dinner with their new neighbours, rich out-of-towners who have a mansion in the Boise countryside as a holiday home. They return to find a corpse in the safe. A young girl, a stranger to Jake and Janine, has crawled into the safe only to die from a gunshot to her chest.

Through Frankie’s contacts, Jake is able to identify the young girl as Ruth Jenner, a 20-year-old girl living in Happy Trails Trailer Park. Jake visits Ruth’s address and is met by a neo-Nazi thug in the process of cleaning up another double murder. Jake is lucky to escape with his life, but is now up to his ears in cops.

All of this happens within the first half of the book. It’s actually a rather slight novel, the paperback is listed as having only 206 pages, and I got through the book in just two sittings. That’s partly because of its brevity, but also because the novel is not overburdened with either character or plot. The author provides a few flourishes to flesh out character and setting, for instance Jake and Janine are on their second marriage together, but for the most part is interested in action. This certainly helps the book zip along, but if you are looking for other things from your reading like thematic exploration, then you are likely to be disappointed.

The second half of the novel is almost completely action-based. Its cover gives the game away, and the author must surely have been influenced by Stephen King’s The Running Man, and Richard Connell’s The Most Dangerous Game. Jake, Janine, and Frankie find themselves lured into a trap. The rich businessmen and powerful, including their new neighbour, are finding victims who won’t be missed and then hunting them for sport. The trio are set free at night in the countryside, and given a short head start. If they can make it back to town, they can go free, but first they have to survive the night being hunted by armed men.

The author is on stronger ground here. It’s a good set-up, and he doesn’t disappoint. There are several good set pieces, including a shoot-out in an abandoned family hotel, and a couple of encounters with angry rattlesnakes. Kolakowski makes some attempts to draw some thematic parallels with his protagonists’ situation and the exploitation of the working classes by today’s business elites, but it is no more than window dressing for his pulp-infused thriller. He is sensible enough to make sure it doesn’t slow down proceedings.

Brit Grit writer Paul D Brazill included Nick Kolakowski in his round-up of indie authors to watch out for.