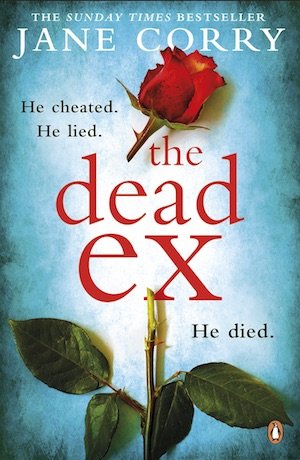 Written by Jane Corry — There’s something about Jane Corry’s writing that resonates with crime fiction lovers. Her 2016 book My Husband’s Wife was a psychological thriller that kept readers wrong-footed to the end. It received five stars when we reviewed it, a piece that is one of the most popular articles on our site. The Dead Ex is another standalone where the lives of different women are strangely interconnected.

Vicki Goudman lives alone in a little cottage by the sea in Cornwall. She practises aromatherapy and is steadily building up a loyal clientele. She lives a simple, unassuming life, so what could possibly make her the focus of a crime novel?

It soon becomes obvious that Vicki hasn’t lived here for long and that she isn’t, in fact, alone. Her constant companion is epilepsy and she must tailor her life to cope with it – no television because of the flickering images, no kettle in case of seizures while pouring hot liquid. or baths for the same reason, she even wears bright colours so she can be easily spotted if she has an episode.

Another side effect can be loss of memory, so when the police appear on Vicki’s doorstep to tell her that her former husband David is missing, she is unsure whether she’s had anything to do with his disappearance. It’s the start of a sneaky, smartly conceived ‘did she or didn’t she?’ tale that has much to commend it.

Charismatic and handsome, property developer and philanthropist David Goudman is also a serial philanderer. He has now remarried and his latest bride is his former PA, Tanya, who maintains she knows nothing of her husband’s whereabouts. Vicki, on the other hand, has secrets and as this book progresses, they are revealed, tantalising glimpse by tantalising glimpse – and some of what you’ll learn will make you stop, gasp, and hurriedly reread.

Alongside Vicki’s story we learn about Scarlet, a sharply intelligent little girl with a crook for a mother. Zelda includes her eight-year-old daughter in all manner of ‘games’, sometimes involving empty Pringles packets that contain a strange white powder. Scarlet is happy to do whatever her mum asks, but when they are caught red handed during one of their drugs transactions Zelda is arrested and Scarlet goes into care. Suddenly, the studious little girl has a whole new set of lessons to learn as her fellow foster children involve her in complex shoplifting sessions.

What’s the possible connection between the two? It’s not obvious, and is set to tax your powers of deduction for much of this story as Corry creates two central characters who play with your sympathies, the woman trying to rebuild her life after misfortune and the little girl who is too innocent for her own good. The past is destined to come back and haunt them both.

From the off, things move along at speed, leaving you gasping for air at times. Then a third character enters the narrative and things get even more complicated. Who is she and does she hold the key to all this? You’ll have to read the book to find out.

Corry shows skill in juggling all the strands and not getting you tangled up in unnecessary detail. Her style is crisp and her central characters are well rounded, although some of the bit players teeter on the edge of caricature at times. This is a novel that will sweep you along, although the final chapters put on the brakes somewhat and steer a little over that finely-drawn line into the implausible. Those moments aside, this is an enjoyable psychological thriller with some smartly executed twists and turns. If you haven’t encountered her before, it’s time to add Jane Corry to the list of authors to look out for.

If you enjoy a read with missing persons at its heart, try Howard Linskey’s The Search or The Missing Girls by Carol Wyer.