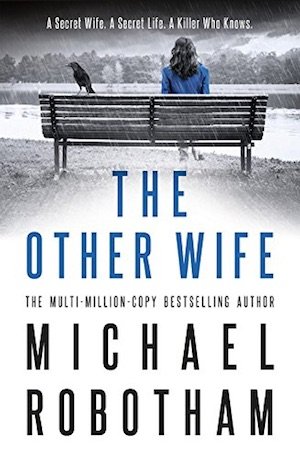 Written by Michael Robotham — Joe O’Loughlin’s journey began in 2004 when Michael Robotham released his debut novel The Suspect and introduced the clinical psychologist. The Other Wife is the ninth to feature Joe and, as Robotham hints in the acknowledgements, it may well be the last.

That would be such a pity, as Joe has become a firm favourite with crime fiction fans. But he has Parkinson’s disease, and it is becoming more debilitating book by book. As The Other Wife opens, Joe is reflecting upon his illness and how it is gradually developing. Drugs are helping him to keep up a semblance of normality and he is exercising daily as recommended by the doctors, but as the book progresses you have to look on, painfully, as Joe’s limitations are revealed.

The O’Loughlin family is also in mourning, still grieving the sudden death of Joe’s wife, Julianne, just 16 months ago. She died following complications from a routine operation and while Joe and his elder daughter Charlie battle to put on a brave face and carry on, his younger daughter Emma is suffering badly, withdrawing into herself, having nightmares, refusing to look at photos of her mother and causing trouble at school.

Julianne’s untimely death has cast a shadow over them all and hospital is the last place Joe wants to visit, but when he receives an urgent call that his father has been attacked and is in intensive care, he rushes to be by his mother’s side. He arrives to find his father in a coma, monitored by a bank of machines and watched over by a caring companion. But it isn’t Joe’s mother, instead he is faced with a woman he has never seen before; a woman who claims to be William’s other wife…

Joe throws Olivia Blackmore out, but the more he looks into her claims, the more he realises that she is telling the truth. His father, married to his mother for 60 years, has been living a lie. And as it becomes clear that William’s injuries were no accident, the question is: who inflicted them and why?

Don’t expect any quick and easy answers, because Robotham is a past master at misdirection and he demonstrates the full range of his skills here. Everyone, it seems, has something to hide. But who, out of an ever-growing list of suspects, is desperate enough to try and kill someone in order to keep their secrets under wraps?

Joe’s skills in clinical psychology go onto the back burner as he lets his heart rule his head, putting him in all manner of perilous situations. There are some heart-in-the-mouth moments as he rushes in where angels would fear to tread. Thank heavens for his pal Vincent Ruiz, who offers sanguine support and much-needed muscle when the situation calls for it.

There’s also a love interest, of sorts, in the shape of Kate Hawthorn, a Met detective who goes above and beyond the call of duty to help Joe in his quest for the truth. Like almost everyone else we encounter in The Other Wife, she has secrets she’d rather not share, but the scenes involving the pair are delicately drawn and some of the best in the book.

Look out for some classic Robotham dialogue too – a throwaway line from Ruiz involving God and a millennial barista is a particular joy in a book that has so many highlights. For me, however, it falters a little towards the end, with a denouement that is unexpected, but not in a particularly pleasurable way. Where you may expect fireworks, instead there’s a twist that takes a detour into the implausible. But don’t let that mar what may be among our final moments with a fine, fine character. Let’s hope it’s au revoir Joe and not goodbye.

Read our 2012 interview with Australian-born author Michael Robotham as he talks about Joe O’Loughlin around the time Say You’re Sorry came out.