First we had Hinterland. Then Keeping Faith blew viewers away. And the latest crime show from Wales that’s turning heads is Hidden – or Craith as it’s known in Welsh.

Airing currently on BBC Four, you can catch up with the programme on iPlayer. But if you live outside the UK it’ll be worth keeping your eye on the streaming services available in your area because this is a slow-burn crime drama, with some police procedural mixed in, that’s full of Celtic atmosphere and a creepy sense of discontent and danger.

Wrongful imprisonment
A woman’s body has been found at the bottom of a waterfall in the wilds of North Wales. In her early 20s, her wrists had been bound for some time before her death, leading police forensics to believe she was held in shackles. And DI Cadi John (played Sian Reese-Williams) is even more surprised when it turns out that the victim, Mali Pryce, went missing more than five years prior. She was a tearaway teen and everyone thought she’d just run away.

DI Cadi John and DS Owen Vaughan are leading the investigation, which leads to a cold case.

While John’s problems at home mount due to her father’s ill health, she begins connecting the case to other disappearances – young women with brown hair who have been failed by the system. Is someone out there preying on the vulnerable?

Well, the answer is ‘yes’ and from early on you’ll become acquainted with Dylan Harris, who is played by Rhodri Meilir. Sullen and lanky-haired, he works in a slate factory, and lives with his mother and daughter in a remote woodland cottage. Things aren’t right with Dylan and his kin. His mother still beats him, for a start. When he spots district nurse Lowri Driscoll doing her rounds, and starts following her, the tension begins to ramp up.

Iona and Dylan Harris – are they holding people captive?

Dark tales of death
While the missing girls plot line is a well worn one of late, the atmosphere and suspense Hidden offers are quite immersive. The eight-episode series was created by Mark Andrew and Ed Talfan, who also collaborated on Hinterland, and once again the setting glares down at the characters like a malevolent stepfather. This time we are in North Wales, with Snowdonia’s weathered, grey peaks, shrouded in mist, and its thick pine forests concealing shadowy tales of death.

University student Megan Ruddock self harms. What’s her link to the case?

The cinematography is once again superb. This time, the directors often play with slightly raised angles, sometimes cutting the characters off at chest height. It gives a disconcerting sense that there are forces at work they can’t control. Hidden isn’t as dark and brooding as Hinterland, and the police characters seem to have a lighter aspect to them, but there’s no cosiness to be found in roughed up estates and ramshackle homesteads of North Wales. The dialogue switches between Welsh with subtitles, and English, and the programme has been shown in Welsh on S4C. Some have complained that the accents – in Welsh and English – are not those of North Wales, but that seems a minor gripe in the scheme of things. Hidden is an engrossing crime show.

You can watch Hidden on the iPlayer here for a limited time. If you’ve watched it, tell us what you think below. 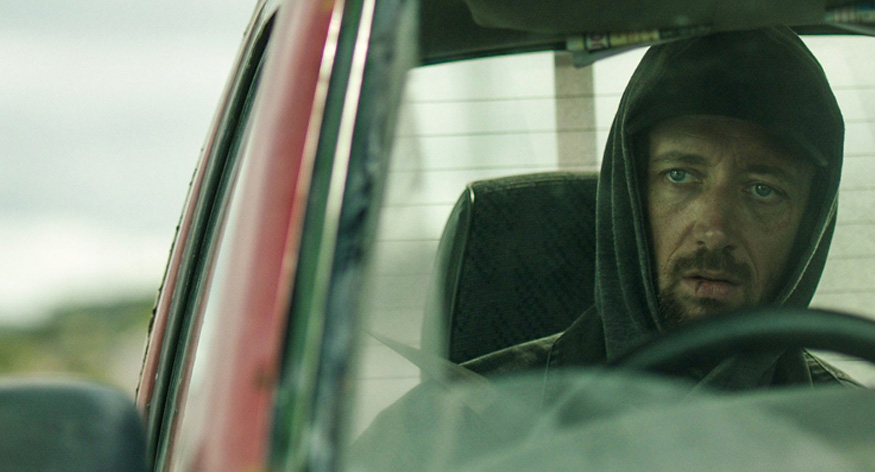 Dylan is a troubled man. But he’s also dangerous and devious.