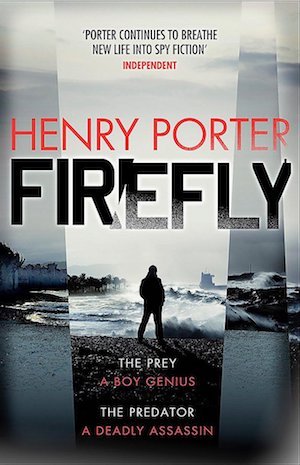 Written by Henry Porter — These are interesting times. Trump and Brexit dominate the headlines, and there are so many other bad things going on in the world. Crime fiction can provide wonderful escapist entertainment for those with news fatigue, but it can also illuminate important topics and provide a different viewpoint or bring fresh knowledge to light. Firefly, with its focus on the refugee crisis spreading from Africa and the Middle East through Europe, is exactly that kind of book.

Luc Samson, part-time professional gambler and ex MI6 spook still exists on the fringes of the shadowy world of espionage. Samson has just returned from the Turkish-Syrian border, working for a private espionage company, when he is approached by Peter Nyman on behalf of his old bosses.

Western security forces have got wind that a teenage boy on the refugee trail from Turkey into Northern Europe witnessed an IS massacre while still in Syria. The boy was in a refugee camp in Greece and told the camp psychologist that he had seen members of IS in the camp as well. It’s not clear what else the boy knows, but if IS terrorists were coming into Europe posing as refugees then there is a possibility that they could be planning an attack. It is imperative that they find the boy and debrief him, so Samson’s job will be to fly to the camp and pick up the boy’s trail.

Samson talks to the camp psychologist, Anastasia Christakos. She confirms the information from MI6 and tells Samson she thinks the boy is Syrian, is of exceptional intelligence, and that he has already left the camp.

This sets a pattern that repeats through much of the novel. Hakim – we learn his name before Samson does – moving along the trail through Europe, always one step ahead of Samson, increasingly aware that he is being followed by members of IS, but not knowing that his saviour is just a day behind. In the latter stages of the book, as his pursuers, both good and bad, gradually make ground on him, Hakim’s story becomes incredibly tense.

What grounds the novel, and one of the key elements in its success as a thriller, is the author’s mastery of the topic. The scenes in the camps, and on the road, come across as absolutely believable. It’s not just the obvious stuff – the refugees’ desperation, or the shortages of food and medicine – but also the small details that convey Hakim’s journey so well. Things like the conversations between refugees about which route to take, the Arabic websites providing advice and the dangers of the road. Hakim may face the additional peril of the IS soldiers tracking him, but all refugees are hostages of fortune. The trail is full of hazards, from wild dogs to people traffickers, and their fate is subject to the whims of politicians and police commanders. Author Henry Porter does a fantastic job of humanising the images we see on the news.

After the initial set up, the narrative is driven alternately by Samson and Hakim. Porter’s ability to find the voice of this resourceful young boy is another highlight. He manages to keep Hakim optimistic despite the most difficult circumstances, and the cunning and resilience he shows on his journey are a remarkable triumph of the human spirit. Of course no child can endure such difficulties without being affected, and Porter’s psychological profile of Hakim, revealed towards the end of the novel, is not only credible but insightful.

Firefly delivers not just as an espionage thriller or as an informative piece of fiction, but as a celebration of humanity. Though harrowing, it will also bring a smile to your face just as often as it sets your pulse racing.

If you like the sound of this you should also check out Derek B Miller’s The Girl in Green.