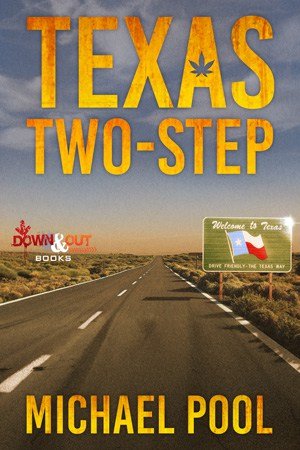 Written by Michael Pool — In this novel of crimes, both petty and not-so, Michael Pool takes you from the laid-back atmosphere of Colorado, where marijuana growing, possession and sale is legal, to rural Teller County in East Texas, where it definitely is not. The county’s official policy is strictly anti-pot, rigorously enforced by its long-time sheriff, Jack Gables, and especially if he isn’t getting a cut of the action.

Transplanted Texans Cooper Daniels and Trevor Davis have been close friends since childhood and have been living in Colorado for years. They think of their Texas drug deal as just going home for a spell, but home has changed, and they’ll have to dance a pretty lively Texas Two-Step to stay out of jail and, maybe, out of the cemetery.

Cooper believes it’s worth the risk of selling his organic crop to the sketchy Texas drug dealer Sancho Watts because he’s vowed this deal will be his last. He’s turning over a new leaf and has sworn to go legit to please his pregnant girlfriend. If he doesn’t get straight, she’s leaving him.

Cooper and Davis seem like good-natured stoners, but Watts is a wild man. Some time before the story starts, Watts sold a psychedelic drug to the grandson of a Texas state senator precipitating the boy’s suicide. Now the legislator wants revenge, and he’s tapped Texas Ranger Russ Kirkpatrick to get something on Watts – anything, as long as it puts him in jail for a long stretch.

To Kirkpatrick, the senator is a pest with a strong sense of entitlement but the man won’t let go and if Kirkpatrick doesn’t produce, he’ll be a Ranger no more. While he’d rather not have this assignment, he’s stuck with it, and it leads him to Teller County where the sheriff is notorious for pulling in the welcome mat, resenting and resisting any outside interference.

Sancho Watts has teamed up with a Teller County celebrity, and you’d have to appreciate how much Texans love their football to understand the full significance of this partnership. The young man is former University of Texas footballer Bobby Burnell, who won collegiate football’s top honour, the Heisman Trophy, and had a stellar NFL career ahead of him. Unfortunately, not two days after signing a multi-million dollar contract with the Carolina Panthers, he got drunk and totalled his car, an accident in which he lost two fingers and a football career. His days as a premier quarterback were over before they got started.

While Bobby Burnell has some residual star power, he’s also become something of a sad joke in the community – Bobby Burnout – and in his disreputable family. His uncle, a violent man who runs a full hand of scams in the county in partnership with the sheriff, loathes him. When Bobby spills the beans about Watts’ play with the Coloradans, these big time crooks want in.

Michael Pool’s evocation of the dissolute life Cooper and Davis encounter in Teller County is depressing, mainly because Cooper is tired of the drug- and alcohol-drenched nights. Like him, you want them to get in, do their deal, and get the hell out. The tension builds as Watts and Burnell stall on completing the transaction. It seems they just want to party.

Ranger Kirkpatrick knows where they are hanging out. He even knows about the marijuana deal and how Cooper and Davis transported it down to Teller County. He really doesn’t care about that; he just wants Watts. But he can’t arrest anyone until the deal goes down and there will be enough charges to stick. It’s hard to see how he can catch Watts in a compromising position without ensnaring Cooper and Davis too. The separate strands of the story move smoothly toward an inevitable showdown, the outcome of which could go a number of different ways, most of them disastrous.

Pool is light on description, and he writes good dialog that is often quite funny. The banter between Kirkpatrick and the two police officers helping him – including an attractive, but fed up deputy who works for Sheriff Gables – contains a lot of good humour, and before the dance is done, they are going to need it.