Beside the Syrian Sea 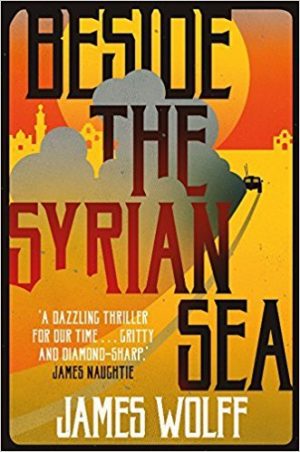 Written by James Wolff — Reading this debut feels like a stroll in a dangerous section of town. That’s probably how the protagonist in this espionage thriller feels too. Jonas is a former desk-job employee of MI6. His father, part of a church delegation visiting Syria, has been kidnapped by Islamic fundamentalists who want $100 million for the 75-year-old’s return. Father and son have been a bit at odds but despite that – or maybe because of it – Jonas has vowed to rescue him.

Jonas worked for British Intelligence, yes, but his experience is thin and contacts few. Author James Wolff puts him and his exploits in the realm of the do-able – making decisions and taking action like an ordinary person rather than a superhero spy. As a result, this is a believable if somewhat erratic and doubt-ridden character, easy to identify with and root for.

The story starts in Beirut, in a seedy bar, where he seeks the help of a middle-aged Swiss priest called Tobias, who was defrocked over some scandal but has previously arranged the release of terrorist-held hostages. He doesn’t at first tell Tobias that this new person to be rescued is his father, which might be a mistake. He does have one trick up his sleeve. Tobias is interested in a woman named Maryam who’s stuck in Syria and Jonas suggests that if Tobias helps MI6 can get her out.

Naturally, he has no official standing in this shaky rescue mission and it’s extremely unlikely he can deliver on his promise to extract Maryam, or on any of the commitments he ultimately makes with Hezbollah representatives, the espionage establishment, and anyone else he thinks can help him. You feel you’re mounting a wobbly tower made of playing cards. One false move and the whole fragile edifice will tumble down around you.

MI6 is naturally unhappy with Jonas’s freelance efforts and sends the tennis-playing Desmond Naseby to befriend and spy on him. Officialdom wants him to return to London and let them proceed at their snail-like pace to try to retrieve his father, if they are trying at all. Jonas doubts they are.

Naseby is quickly followed by CIA case office Harvey Deng. Naseby and Deng believe Jonas holds a strong hand, and he lets them think it. Deng is all business, aggressive and profane, but Jonas and Naseby banter quite amusingly. You’re never sure whether Naseby gets that Jonas is taking the piss.

“Beneath that placid surface beats the heart of a field man, an operator – like me. You can’t stand to be cooped up. Smell of the sea, bustle of the bazaars,” says Naseby.

I laughed out loud at Jonas’s remark and at Naseby’s ‘like me,’ such a ham-handed attempt to bond with him.

His opponents all want Jonas to think they know more than they actually do, so it’s as if their actions are reflected in a fractured mirror. Nothing quite fits. Despite his shambling demeanor, Jonas has one trump card which is his terrific memory. All those years at his desk reviewing situation reports have turned his brain into a file cabinet of disparate and occasionally even useful information.

Meanwhile, Edward Snowden taints the narrative like a malevolent spirit. Before long, it dawns on the higher-ups that Jonas may have availed himself of some of those secret reports. When it appears he is trying to trade a USB drive for his father, they give his capture the operational name Leaky Pipe and panic sets in.

What keeps the pages turning is that, like Jonas’s MI6 and CIA opponents, you can never be sure how much he really knows, what his strategy really is, or even if he has one. As a result, the outcome of his dangerous mission for himself, his father, Maryam, and Tobias could succeed or, as seems more likely, go disastrously wrong there, Beside the Syrian Sea.