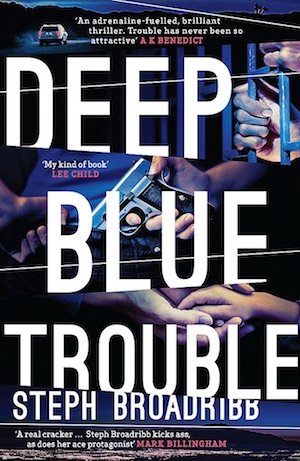 Written by Steph Broadribb — Lori Anderson, Steph Broadribb’s Florida-based bounty hunter and single mother, returns in Deep Blue Trouble. There’s no rest for Lori as this story begins one week after the events in the author’s debut novel, Deep Down Dead.

Old Man Bonchese, head of the Miami mob, believes James ‘JT’ Tate was responsible for the disappearance of Lori’s husband, a man Bonchese thought of like a son. But it was Lori who killed her husband after trying to apprehend him for the murder of her best friend.

JT is the father of Lori’s daughter, Dakota, was Lori’s mentor in the bail bond trade, and is willing to take the blame for the murder in order to protect Lori. After events in the previous book, he’s now in prison with a contract on his head. Ironic, considering he is a bounty hunter as well. After years of stifling feelings for JT, they’ve resurfaced for Lori and she’s desperate to get him out of prison so they can be a proper family.

Special Agent Alex Monroe offers to help Lori and JT but only if she will undertake a job for the FBI. Until last week Gibson ‘The Fish’ Fletcher, a high-end thief, had been serving a triple life sentence in a maximum security prison for murdering two people on a yacht. Now he’s escaped, killing three guards in the process. Lori has successfully tracked down Gibson before and Monroe wants her to do so again. Apparently, the absconder is heading for San Diego.

Reluctantly, Lori agrees. Aided by Red, an expert at ferreting out information, Lori first travels to meet Gibson’s brother, Donald. But he’s living in a house with excessively high security measures and is reluctant to talk. Donald hasn’t seen Gibson for a while, but he tells Lori that his brother was in a long term relationship with a married woman, Mia Searle. The husband, Marco, found out but Gibson ended up in prison for theft before Marco could carry out his threat of killing the man. While Gibson was doing time, the Searles relocated to San Diego, where Gibson is heading – Lori assumes for Mia.

However, all is not as it seems. Lori is being followed by a mystery man and the mob are on the trail of Gibson too. What he stole was a solid gold chess set worth $1.3 million, and it’s still missing…

Despite following on so quickly from its predecessor, Deep Blue Trouble can be read as a standalone well enough. Broadribb lays out the previous events over the first few chapters, ably filling in the blanks for those new to Lori Anderson although perhaps a tighter precis might have been beneficial. However, what follows is a generally pacey, page-turner of a novel with Lori racing against the clock to get JT out of jail and keep her daughter safe. Hardly anyone is who they seem to be. Lots of twists and turns.

There are no major issues with the overall story, it pushes along with a steady flow of reveals. Lori steadily wins over her detractors and comes through against the odds. The exception is the person following Lori. Although it adds extra impetus to the story, the final reveal is a bit of a disappointment and leaves a degree of cliffhanger, presumably for the next instalment. And there is a mildly irritating tendency for a handful of characters, Lori in particular, to use a local form of diction, using ‘real’ instead of ‘really’ for instance. It might be accurate but it starts to feel forced at a rate of two or three usages a page. However, like Deep Down Dead, Deep Blue Trouble will really grab your attention as the plot races forward with plenty of bumps, thumps and gritty action.

For two more recent action thrillers try Into the Black Nowhere and The Bomb Maker. You can also check out our interview with Steph Broadribb here.