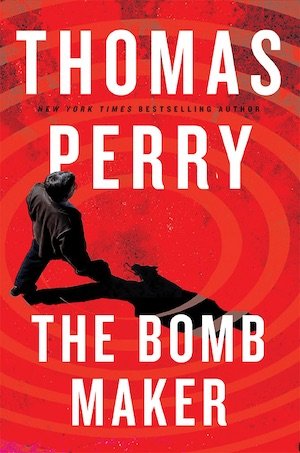 Written by Thomas Perry — We are only just in to the New Year, but few books you read this year will start better than The Bomb Maker. The opening sentence of chapter one draws you straight into the action with its vividly detailed, almost fetishist description of a bomb’s construction. So enticingly described are the levels of concentration needed not to blow one’s self up, and the obsessive degree of planning needed to cause the maximum amount of damage, that by the end of the chapter, we almost want to see our antagonist succeed.

The second and third chapters are told from the point of view of the Los Angeles Bomb Squad. Senior Officer Tim Watkins takes point on a call out to a private residential address. His narrative doesn’t just reveal the bravery of the Bomb Squad officers, but also their grace under pressure. His calm methodical approach as he neutralises each of the bomb maker’s traps engenders confidence in his expertise – a confidence which Thomas Perry brutally undercuts when, as all finally seems safe, Watkins triggers an explosion that kills half of the squad.

Perry, an old hand at the thriller game, has found a way, right at the beginning, to let us know that we, just like the book’s characters, can never relax.

Next we are introduced to Dick Stahl, and what an introduction it is. Stahl is a private security contractor specialising in recovering American citizens kidnapped abroad. A wealthy executive has been kidnapped in Mexico, and his wife can afford the ransom. She wants Stahl to pay it and bring her husband back. Stahl knows the truth however, that this man is only worth keeping alive until the money runs out; the ransom money will buy some time, but will not deliver him home. The story of Stahl’s cross-border incursion and repatriation of the executive is tense, dramatic, and on its own would have made a great short story.

Stahl has a background in both the police and military as a bomb disposal expert, and after the tragedy of a few days before, he agrees to be deputised as a civilian to lead the LA Bomb Squad until more officers can be trained.

It is a knockout beginning to the novel, and the same high standard continues through the second act. It doesn’t take long for Stahl to establish that the increasingly frequent bombs are the doing of one individual, and that a campaign of terror is underway that is not just focused on the Los Angeles population, but actually the bombs are booby-trapped in an attempt to kill as many bomb squad officers as possible. Stahl is more than competent, and under his leadership, the squad comes together rather than falls apart.

He begins a relationship with Officer Diane Holmes, and in doing so, breaks departmental codes of conduct. Their relationship is exposed when Holmes is injured in an attack at Stahl’s home. Perry excels in more than just drama. The differing reaction from the officers to Holmes’ near death experience affords for some acute characterisation. We are shown how Holmes begins to re-examine her life and ask herself questions about her attraction to Stahl. He, however, though loyal, brave and clear-headed in danger, is mostly oblivious to Holmes’ doubts as he lacks the ability to be self-reflective or empathise with others.

Perry makes his only misstep towards the end of the novel. The bomb maker is never named, and for most of the book we are not privy to his motivation or the practicalities of his task. It matters not – in fact, the book suffers when these are revealed. He goes from being an implacable, unknowable foe into something less terrifying, and in the final climactic action sequence, Perry’s choices reduce the antagonist somewhat and he becomes a secondary threat.

Find out why Thomas Perry’s debut The Butcher’s Boy is one of the debut novels that changed crime fiction. For more LA drama, see Michael Connelly’s Harry Bosch series. The Bomb Maker is out on 3 January.

By RoughJustice
Translated by Megan Turney — Oslo’s New Year’s Eve festivities are disrupted by a terrorist attack. The climactic fireworks display is interrupted by an explosion. A bomb, hidden in a rubbish bin at the riverside, has been remotely triggered; luckily most of the force of…
iBookKindlePrintReviews

By RoughJustice
Lee Child’s decision to share writing duties with his younger brother Andrew could have been a big risk. Jack Reacher is an established favourite in the world of crime fiction, having appeared in 24 previous books as well as a feature film starring Tom Cruise….
iBookKindlePrintReviews

By DeathBecomesHer
Lincoln Lawyer Mickey Haller has featured in six books in his own right and made guest appearances in other Michael Connelly novels – most notably the Harry Bosch series (Haller and Bosch are half brothers). But what makes The Law of Innocence so different from…