A Hole in One 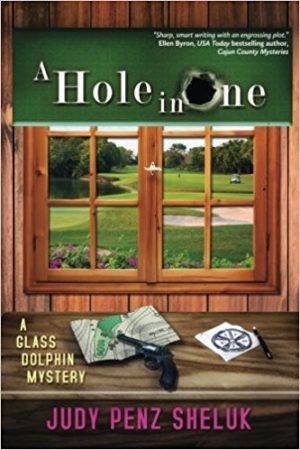 Written by Judy Penz Sheluk — In this charming cosy mystery set in a small town north of Toronto, Canada, Arabella Carpenter decides to promote her Glass Dolphin antiques shop by sponsoring a hole-in-one competition at a local charity golf tournament. The prize: a pricy jet ski. It seems a safe bet but anyhow Arabella has bought insurance to cover herself in the unlikely event someone actually sinks a ball with a single shot. What she hasn’t counted on is that when she hits her ball into the woods, what she finds among the trees is not a golf ball but a dead body.

The victim, killed by a gunshot to the chest, turns out to be the estranged father of Arabella’s ex-husband, Levon Larroquette. The two were so estranged that Arabella had never met her ex-father-in-law. But she has seen him. He and Levon were arguing in the park just a few days before the tournament.

Arabella still has feelings for Levon, and precisely how strong those feelings are is revealed whenever he encourages her to join him in drinking a little too much cognac. But they’ve both moved on, she tells herself. He’s in a relationship with the woman who organised the golf tournament, and she’s had a brief flirtation with a local police detective. It’s a small town, so her former boyfriend is now investigating the murder and seems inclined to pin the crime on Levon.

Levon might have flaws as a husband, but Arabella is convinced he’s no killer. Worried that her information about the quarrel appears to give him motive, she becomes determined to clear Levon’s name by investigating the murder herself, with the help of her business partner Emily. Emily is a former investigative reporter, which means her probing questions and her instincts are good ones.

Because the police know Arabella, they repeatedly warn her against meddling in the case – a warning she won’t heed, of course. This is the second in the Glass Dolphin mystery series, in which Arabella and Emily boldly go where, maybe, they shouldn’t. The first – Hanged Man’s Noose – is also the name of a pub in town, a reference to a notorious local miscarriage of justice. Though Arabella wants to prevent another one, some of the information she turns up seems to implicate Levon even further.

The inquiries that Emily and Arabella conduct give author Judy Penz Sheluk the opportunity to introduce a large cast of interesting, often amusing characters. Some are owners of other shops and restaurants in the town, and an observant lot they are. Others, like the hole-in-one insurance man and the members of a strange organisation called FYSST (Face Yesterday; Save Someone Tomorrow) are custom-created for this tale. It seems Larroquette-pere was in town on some kind of FYSST apology mission, but Levon was having none of it.

Along the way, a profusion of other characters appear with their tidbits of information and propensity for creating confusion: an Elvis impersonator, potential romantic interests for both Arabella and Emily, a vengeful local newspaper editor and reckless blogger, and an antique dealer going out of business who has sad secrets of her own.

Sheluk is an antiques expert and currently the editor of the New England Antiques journal. Writing with a light touch, she has a knack for inserting just the right amount of intriguing detail about the antiques market and running a small business. That information gives the story a grounding in reality that is a nice balance to the rest of the antic plot, which has Arabella and Emily traveling around, asking questions, sticking their noses in, and, true to cosy tradition, eventually getting their answers.

The writing style of A Hole in One is thick with dialog, with the banter between the two women full of good humour. You may not doubt that they will succeed, almost despite themselves, but the fun is in seeing how they go about it as the theories – and the bodies – pile up.

If you like the sound of this, also see our roundup of cosy mysteries from the USA.