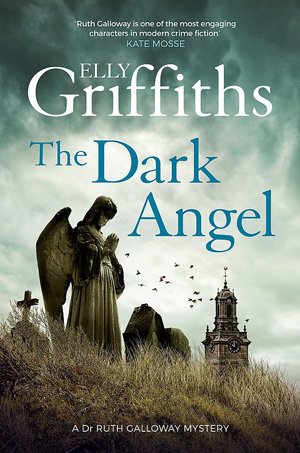 Written by Elly Griffiths — The Dr Ruth Galloway series has reached book 10 and she’s come a long way since The Crossing Places was published in 2009. Ruth’s skills as a forensic archaeologist are called upon once more as she gets an invite from an Italian archaeologist.

Dr Angelo Morelli wants her to come to a small town in the Lazio region to view a set of Roman bones, and Ruth decides to make a holiday of it, taking daughter Kate, best friend Shona and Shona’s young son Louis along for the ride.

It’s an idyllic spot, but what’s that scrawled in chalk across the front door of their borrowed apartment? And why would anyone leave an animal skull on the doorstep? Angelo assures Ruth that there’s nothing to worry about, but she isn’t so sure. Then, when the parish priest dies in mysterious circumstances, the sleepy village suddenly takes on a much less friendly ambience.

Back in Norfolk, DCI Harry Nelson has plenty on his mind. Worries about his wife’s unexpected pregnancy are at the forefront of his mind, but they get pushed into the background when Nelson learns that Micky Webb has been released from prison. Webb was locked up after setting fire to his home, killing his wife and children. He gave a plea of diminished responsibility in court and is now out on licence. At the time of his imprisonment Webb threatened Nelson but now he claims to have found God and become a reformed character. Is Webb to be trusted? Nelson, for one, is not convinced.

To add to Nelson’s woes. Ruth has left for Italy without telling him and he’s furious. What right has she to take their daughter on holiday without his permission? Then news filters through from Italy that has him reassessing his relationships with both his wife and the mother of his youngest daughter. Is Nelson finally going to make a decision about which woman he wants to spend the rest of his days with?

Fans of the series will be familiar with the complex machinations of this particular love triangle – or perhaps it should be a love oblong as Michelle has secrets of her own, involving a certain young police detective… Crime and its detection takes a back seat as all manner of relationship complexities are played out both in Norfolk and Italy.

Elly Griffiths is a dab hand at creating sharply drawn characters, and the sneaky manoeuvres played out in The Dark Angel would confound a chess grand master. You’ll need your wits about you to keep up with the to-ing and fro-ing, believe me. Fans of the author, Nelson and Ruth will ‘get’ this book, but newcomers will probably bemoan the paucity of real detective work. It was only at the end of this novel that I sat down and registered the distinct lack of a criminal element within its covers. Yes, there’s Micky Webb and also the murder in Castello degli Angeli, but they are relegated to the periphery of a plotline where dysfunctional relationships take all the limelight.

It’s a great idea to move the action from darkest Norfolk to a place that’s hot and sunny and I enjoyed the sense of place created by Griffiths, but ultimately I felt disappointed. I was hoping for a Louise Penny/ Inspector Gamache vibe, instead it was more Midsomer Murders with a side order of tagliatelle. One for readers who are already familiar with Ruth and Nelson – if you’re not, then I suggest starting at the beginning of the series and working your way through.

Like your crime in remote settings? Try The Nature of the Beast, The Visitors or the recently released Hell Bay.

By DeathBecomesHer
Forensic archeologist Dr Ruth Galloway and her onetime lover DCI Harry Nelson first appeared in print way back in 2009, and their on/off, will they/won’t they relationship has been tantalising readers ever since. However, alongside the domestic shenanigans are some mighty fine crime mysteries that…