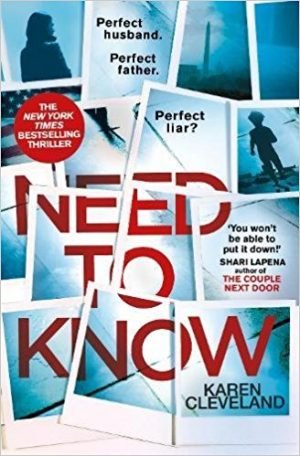 Written by Karen Cleveland — Debut author Karen Cleveland’s new spy thriller comes from a heartfelt place. She wrote it while on maternity leave when she worked as a CIA analyst, and it is steeped with both internal agency politics and maternal concern.

First-person narrator Vivian Miller has been working on an algorithm that will help the agency identify the Russian sleeper cells the CIA is convinced are hiding in the United States. Each cell comprises five agents and a handler, the only person who knows their identities. Since the agents themselves have such deep cover, finding the handler is an essential first step to unmasking the entire cell.

Using her algorithm, she’s eliminated all but one of her handler candidates and is so close to hacking into the computer of the last one – a man named Yury Yakov – that she doesn’t mind the long hours at work. Well, she does mind. She has a loving husband, Matt, and four kids at home, including toddler twins, one of whom was born with a serious heart defect. Matt, though, works from home, and uncomplainingly takes up the slack when she can’t pick up the kids or make the lunches or take Caleb to his doctor appointments. He also cooks.

In a breakthrough moment early in the book, she finally worms her way into Yury’s computer and, in a folder labeled ‘friends’, finds photographs of the sleeper agents in Yury’s cell. Four are strangers. The fifth is a shocking discovery – her husband Matt. Vivian goes into a tailspin as she tries to sort out the lies and deception from the true core of what she thought was a healthy, loving relationship. She recalls how Matt urged her to stay on the job after the twins were born, how he pushed her to get herself on the Russia desk, and so many instances where his seeming thoughtfulness could now be looked at differently… as manipulation. Throughout the story, she believes in him, then she doesn’t, then she does, and her waffling on this question may be realistic or merely convenient, for her and the plot. Yet you sympathise with her dilemma.

Vivian’s uppermost concern is the safety of her children, especially as Yury circles nearer. He’s outside son Luke’s school. Strange cars are following her. Perhaps Cleveland occasionally overdoes Vivian’s mounting anxiety, but you can understand the confusion she is thrown into and how she naturally does return again and again to her touchstone: keeping the kids safe.

Matt proposes a fix. A flash drive upload to the CIA computer to change his picture. At a loss for an alternative, Vivian complies, and is in deeper trouble than ever. The computer history will show exactly what she did. She’d lose her job, her freedom, her family if she were caught. Her life – and Matt’s too, probably – would be over. He is trapped in the situation just as she is.

She cannot really trust any of her co-workers not to reveal her terrible security breach. Because the CIA reportedly harbours a Russian mole, paranoia is running high. When she needs a little investigative help trying to track down Yury, she relies instead on an old friend and colleague in the FBI who has been working with her on the sleeper cell project. He’s reluctant, but she promises to fill him in eventually. The lack of cooperation between the CIA and FBI is notorious, so this is a refreshing twist.

The tension is definitely there in this espionage thriller, ratcheting up with each action Vivian does – or does not – take. The most engaging part of the story is her relationship with Matt, as each new event causes her to reevaluate everything that has gone on before and whether she can ever trust him again. However, I found that plot question rather easier to answer than Vivian did.

Having lived in Washington, DC for eight years, a Washington setting is always interesting to me, and Cleveland describes the area, the attitudes, the travel logistics, and other details evocatively. Reportedly, people in the US intelligence community are enthusiastic about this book and a movie deal is in the works. Vivian’s existential dilemma makes for an exciting, if at times frustrating read.

For more spooks and double-spooks, try Mick Herron’s This Is What Happened. You might also like Mike Nicol’s Agents of State.