Last year, Joseph Knox’s novel Sirens was hailed as a powerhouse of razor-sharp urban noir – a page-turner with a beating heart. Although much has been written about the book that makes Manchester as dirty and dangerous as it gets, there isn’t much about the author himself on Knox’s website. ‘Joseph Knox was born and raised in and around Stoke and Manchester, where he worked in bars and bookshops before moving to London. He reads, writes and runs compulsively.’ We needed to know more about him, ahead of the publication of novel number two: The Smiling Man. So we ambushed him in an alleyway and made him talk about his new book, his detective character Aidan Waits, and more…

Tells us about your antihero DC Aidan Waits. Has he learned from his actions in Sirens?
Aidan’s come a very long way personally and gone absolutely nowhere professionally. In Sirens he was blackmailed into a nightmare undercover operation which his superiors didn’t want him to survive. Because he did, just barely, he’s more resented than ever within the police force. But, of course, during the events of Sirens, Aidan is loved and loves someone in return for the first time in his life. He can no longer treat his life as though it’s worthless and so hopefully we’re seeing the dawn of a new, slightly more professional detective. Maybe the kind of man you’d like around in a crisis. 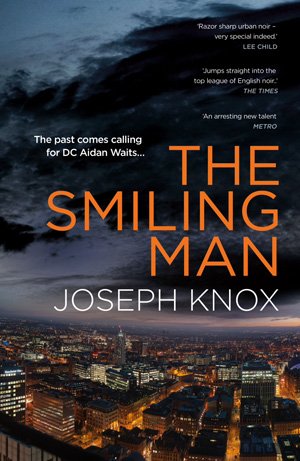 It took you eight years to write and rewrite Sirens. You’ve had a much shorter time to deliver book two. Has this dramatically changed the pace and style for The Smiling Man?
It really has. A lot of those years writing Sirens were learning my craft, finding my voice, et cetera – and they were vital to the kind of noir I wanted to write. But another reason it took so long was that it was constructed entirely around various day jobs. Usually I had a couple of hours a day to write. This time, I was able to take six months off work and write every single day for 16 to 20 hours. It led to a much more immersive writing experience for me. I really felt like I lived it, and I think it allowed me to get more in there.

You say that this book is much better than Sirens and takes your writing to a whole new level. How, what, why?
Of course it’s for other people to really make that decision but…

While I’ll always be grateful to Sirens for getting me published, it’s also a book that was very hard for me to write. It began as a kind of journalism about the people I was meeting during a very bad time of my life, and for that reason there are parts which will always make me wince or feel particularly upset. In the second book, free of that, all I had to think about was ‘what will make the best possible thriller?’ That felt incredibly freeing and fun.

You kept a dark secret for eight years. How did you know the time was right to tell the world that you had been writing Sirens, when you pitched to agents and publishers at the Pitch Perfect session at the Bloody Scotland festival? Pitching in front of an audience and bestselling authors must have been tough.
Pitch Perfect was great for me personally, but it didn’t directly lead to me getting an agent. To put it simply, the book wasn’t ready. There were people who would have happily sold it to a publishing house – but I would have always known it wasn’t the best I could possibly do. It was a hard decision to withhold it for another couple of years, but the right one. In terms of the pitch session itself, though, I’d totally recommend it. Not only did it force me to think of my work more seriously – the fear of public speaking will do that – but I also met like-minded people, all of whom shared a similar passion, and that can be a good motivator when you’re doing something as difficult as writing a book as an unknown author.

The Smiling Man is based on a true and unsolved crime with the weirdest premise you’ve ever heard of. Can you tell us about that?
Essentially, my inspiration was an unsolved Australian case. A man was discovered dead in suspicious circumstances with no identifiable characteristics. The plot thickened with the discovery of a note on his person which said ‘finished’. This note was then traced back to a book which had been discarded near-by and contained the phone number of a young woman. As a writer, by this point, I’m already overwhelmed with possibilities. Why would this man hide his identity? How was he so good at it? (In real life the man has never been identified) Why would someone kill him? And does the note/phone number and young woman give this a poignant, romantic dimension? From there I knew I had to write my version of events, transplanting them into Aidan’s deadly Manchester. 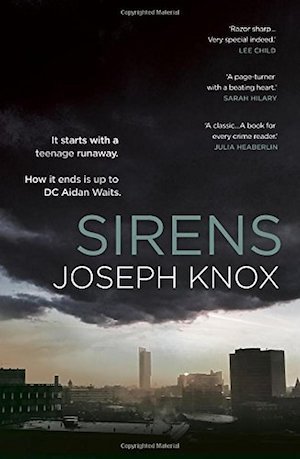 Your author profile is very short on your website. Can you enlighten us further about your experiences and how you have drawn on them for your noir writing?
Probably the best thing that can happen to a young writer – especially one writing noir – is having their heart broken. I did that, made my life and everyone else’s a misery for years and years, drank and cried all the time, took pills, worked in awful bars, lived in damp, sad, small flats, had failed small, sad relationships, lost a lot of friends, and – crucially – read as much as possible while I did. None of it felt like research at the time. I just thought I’d ruined my life and it would never change. Without Sirens to pour all of that darkness into, I don’t know what I would have done, and I really dread to think who, what and where I‘d be.

You are a book buyer and seller. How do you spot which debuts are going to blow people away and which will suffer a low and lingering death?
Ha – I wish there was a surefire way! The two most crucial parts are reading and listening to the publisher. If the book is good, or you can at least imagine who would like it, and if the publisher takes it seriously and believes in the author then that’s about as good a start as you can get. We get it wrong all the time, though, so it’s important to give everyone a fair shake.

Do you have ideas you can share about which way you think the crime and thriller genre will morph next?
I think the most exciting books I’ve read recently, both in fiction and crime fiction, take a real life event and examine it through fiction like Denise Mina’s The Long Drop. I can imagine a few of those things knocking our socks off. But generally trying to predict trends is a fool’s game.

You secured a three-book deal for the DC Aidan Waits series. But can we expect to read more of him? You have said you have been writing about his character since childhood, so would it be inconceivable to let him wander off alone into the dark underbelly of Manchester without you?
I have! Not many people know that, but I wrote short stories about a young man who I later realised was Aidan. You’ll definitely see more of him in book three – although I have a feeling it could end very badly for him…

The Smiling Man comes out on 8 March. Read our full review of Sirens here, and for other exciting young noir authors try Tom Benn, Jonathan Lyon or Jordan Harper.