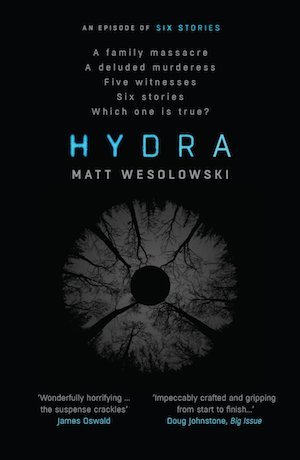 Written by Matt Wesolowski — Six Stories is a fictional podcast that author Matt Wesolowski has invented as a unique means of storytelling. Transcribed in his books, each series of podcasts explores a past crime through six interviews. The host is Scott King and our only access to him and each of the characters is through the podcast. They tell their tales and King cuts in with commentary and relevant footage in the style of a highly produced podcast such as the phenomenally successful Serial. The first book in Wesolowski’s series was Six Stories, and in Hyrdra we are served up a new crime to dissect.

Quickly we are pulled into the tale of Arla Macleod. She is in a medium security institution for the criminally insane, never to be released. Many of the public regard Elmtree Manor as a gilded cage and nowhere near tough enough for the notorious girl responsible for the horrific Macleod Massacre in 2014.

Arla was a teenager living in the small fictional town of Stanwel, on the Fylde coast in Lancashire. Along with her mother and her sister she left Scotland as a toddler when they escaped the vicious brutality of Arla’s father. Her stepfather is prone to paroxysms of religious fervour but life in deprived Stanwel is otherwise unremarkable. That is until Arla uses a hammer to cave in the heads of her mother, sister and stepfather.

The staff at Elmtree Manor have allowed restricted access and the first interview is with Arla herself. Slowly we learn more about her and the savage deaths of her immediate family. There is no question of her guilt. The mystery here is why. Arla offers glimpses into her psyche. She talks about the appearance and reappearance of black-eyed children, standing on the edge of her life. Is this an early manifestation of a psychosis spotting Arla’s adolescence or something other worldly? The court-appointed psychologists at the trial confirmed that Arla was suffering from a psychosis. As King digs he wonders if there is more to it.

King interviews Tessa Spurrey, one of her classmates at Saint Theresa’s Catholic School in Stanwel. She, like Arla, was a devoted fan of Skexxixx, an English shock-rock musician, who went for a pseudo-goth look with black eyeliner running down his face and teeth blackened out. Tessa warns King off and advises him to drop the investigation. Soon after, he starts getting threatening emails and texts. Simple trolling or something more serious? The messages threaten him with doxxing – the malicious posting of personal information on the internet to expose King’s carefully shielded identity.

There is a suspicion that Arla was abused by some older boys during a family holiday in Cornwall and around this time the creepy black-eyed children start appearing. They are a recurring and chilling presence. We learn of several internet games Arla was playing to gain access to spirit worlds and ghosts. Wesolowski pulls us in with the sympathetic characters and a rising dry-mouthed dread as Arla’s backstory is teased out.

This is a compelling story in an original format. The strict interview-based narrative could be limiting but Wesolowski is certainly taking the approach that the best art is bounded by a frame. Hydra manages to build a lot of tension and excitement within the self-imposed boundaries of this narrative. And, it is hard to imagine a novel better suited to dramatisation for an audiobook version.

It’s a whydunnit and an intelligent psychological thriller that is pushing at the edges of the supernatural crime genre. If you like every single one of your loose ends perfectly tied up then you may be left slightly frustrated but it is the marker of a confident and talented writer. Matt Wesolowski knows what to deliver and what to leave to our imaginations. There may be a limit to how far he can push this format but this is a very classy novel and the Six Stories series deserves a long run.

For more crime fiction with a paranormal edge try books by John Connolly and Tony Black. Hydra is also available as an audiobook, which might be the best format to enjoy it in.