Zen and the Art of Murder 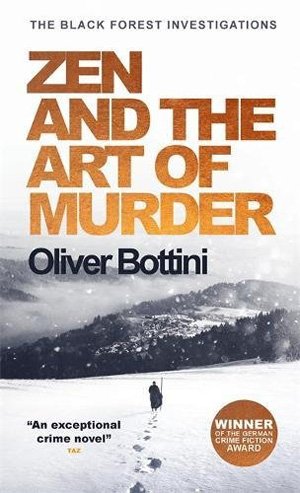 Written by Oliver Bottini, translated by Jamie Bulloch — With its title, you might expect this book to be about a father and son on a motorcycle journey across the United States as per Zen and the Art of Motorcycle Maintenance by Robert M Pirsig. Or maybe you’re thinking of a Japanese setting, in the home of Zen Buddhism? Instead, we find ourselves in the Black Forest, a region which belongs to Germany but has porous borders with France. Unsurprisingly, some of the investigation takes place in France and the police officers in both countries are quite used to working together, although not always harmoniously.

The main character, Chief Inspector Louise Boni, perfectly exemplifies the region – half-French, half-German, and fluent in both languages. She is a troubled soul, however, and her hatred of the winter months is completely justified. Her brother died in the snow, her husband left her in the snow and in the course of her duty she killed a man… in the snow. So she dreads the festive season and doesn’t mind being plunged into an unusual investigation at this time of the year, when others are eager to be at home with their families. However, the case seems to be more bizarre than any other she has experienced so far.

A Japanese monk is wandering through the snowy landscape east of Freiburg dressed only in his robe and sandals, leaning on a staff for support and carrying a small bowl. He is injured but makes no effort to call for help, merely waiting to be given some food. The villagers are worried that he might be part of some strange sect, but he seems harmless and is almost oblivious to them. Louise follows him into the woods but he is either unable or unwilling to talk in any comprehensible language. All she can tell is that he is terrified of something or someone.

The police chief is not convinced by Louise’s hunch that the man is being followed by dangerous people, so she tries to find an interpreter with some knowledge of Buddhism to help them communicate with the silent monk. In the meantime, tragedy strikes and it becomes clear that they are on the trail of something much bigger and more evil than a vagrant monk. It turns out that he has been in contact with a child-trafficking racket who are ruthless, to say the least.

Sadly, the rest of the book does not quite live up to the unique and promising beginning. Once the police start investigating a Buddhist monastery in neighbouring France, the story moves along predictable lines. There is rather a lot of lecturing about Buddhist principles, so in this aspect at least it does resemble Pirsig’s work, presenting numerous philosophical discussions between Louise and the interpreter who is a German student of Japanese religions with a Japanese wife. Louise is sceptical about the mindfulness and inscrutability of Zen, but feels touched by it nevertheless. However, these ideas do not seem to prove very successful in treating her own struggle with alcohol. Her refusal to accept she has a problem and being asked to go on sick leave by her boss are elements that we have seen all too often in detective fiction.

These reservations aside, this could be the start of a promising series. The cross-border cooperation of the police force is an interesting angle and is something that is far more common in Continental Europe than the US or the UK. Once their back story has been established, Louise and her melancholy but supportive collaborators Hollerer and Lederer are characters who have the potential to carry a longer story arc with far less intrusive detail. Last but not least, the setting is a winner. The region is generally associated with thermal spas and retirement or holiday homes for the well-to-do elderly citizens of Germany, yet here hypocrisy and darkness are never far away from this self-satisfied bourgeois idyll. Think Midsomer Murders with less inventive killing methods but a far grittier, more realistic background.

If you enjoyed Snow White Must Die by fellow German author Nele Neuhaus or if you’ve enjoyed German TV series Nick’s Law on Walter Presents, you will probably want to get hold of Zen and the Art of Murder.