The Girl in the Fog by Donato Carrisi 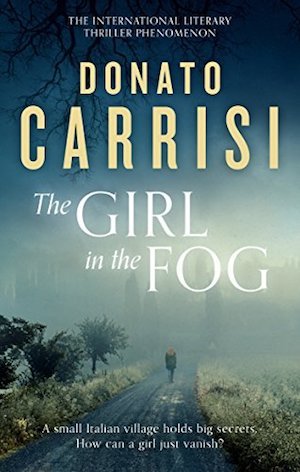 Translated by Howard Curtis — Two months after a 15-year-old girl goes missing in the fog while on the way to church in an Italian alpine town, the chief investigator of the case, Detective Vogel is in hospital following a road accident. He is covered in someone else’s blood.  Vogel is arrested and psychiatrist Dr Flores is summoned to assess whether the confused special agent is fully aware of what has happened, and whether he is responsible for a murder.

Vogel begins telling his story, propelling us back to two days after the disappearance of Anna Lou Kastner, the too-good-to-be true innocent girl who loves kittens and has no vices. Her parents are fervent members of the brotherhood sect and are strictly devoted to God.

Right from the beginning of Vogel’s investigation we are uneasy about him. He is fastidious about his clothing, lining up his immaculate ties and expensive suits in order by colour. A previous case had called his methods into question when he planted evidence to nail his man, dubbed The Manipulator, who served four years in jail before he was cleared.

Vogel is also an arch manipulator of the media and soon has an army of reporters at the scene, hoping whoever has taken Anna Lou will be flushed out. The public responds by laying hundreds of toy kittens and floral tributes around the house, while local people help search the barren mountainsides and rivers for signs of Anna Lou.

Vogel’s sidekick Borghi is an inexperienced officer and a man of integrity, but he is under Vogel’s influence even though he suspects his boss is a control freak who wants all the attention on him.

He is right. Vogel will do anything to solve the mystery and take credit. He hides much of the evidence he finds and is a master broadcaster of fake news, releasing just what he wants while maintaining control for his own advantage. He relishes the idea of evil striking a God-fearing community. He is also desperate to restore his own reputation by solving the case.

The one person Vogel can’t control is his adversary Mayor, the female prosecutor who has a brain and refuses to allow him to act on pure rumour and intuition without hard evidence.

As the media exposure intensifies the locals start to keep their distance, but the wider public appetite for the case is ravenous. Vogel understands he must give the media something and soon he has two suspects in his sights to feed to the wolves. He knows that the public will soon stop caring about pure Anna Lou’s fate and will turn angry and vengeful. People only care about the arrest of a criminal in the belief they will be safe, and that is what he will do.

Vogel’s attention turns to a damaged young man who followed Anna Lou around with his camcorder and then to Martini, a teacher at her school. There is also the mystery of several girls with red hair like Anna Lou, who disappeared from the area 30 years earlier.

The narrative turns back to the day after the disappearance, told from Martini’s point of view. Though he is undoubtedly an oddball, he is both a viable suspect and also a victim of Vogel’s games, so we feel alternate sympathy and suspicion.

Carrisi delivers through his unsettling portrait of the darkness at the heart of human nature; the buying into the media storm, the voyeuristic crime tourists who swarm to the scene and spend hard cash in the remote mountain hotels and the self-serving actions of the anti-hero investigator who, like most of the other characters, doesn’t care about the truth.

This Italian crime fiction translation is stylish, engaging and taut, and keeps the pages turning through the dark times. There are references throughout The Girl in the Fog to ‘ the night when everything changed’. Perhaps this is a little too strong a boast and it diminishes the ending after a compelling first half.

For one more set in the Italian Alps try The Mountain by Luca D’Andrea. We gave 5 stars to Three-Card Monte and The Art of Killing Well by Marco Malvaldi.