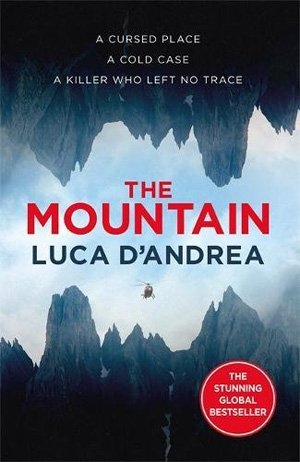 Written by Luca D’Andrea, translated by Howard Curtis — When a debut Italian crime thriller has been translated in 30 countries and its author has been compared to the likes of Stephen King and Jo Nesbo. The book is set in the northern Italian province of South Tyrol, in the village of Siebenhoch, and though its residents are Italian, they speak German. Siebenhoch is near the end of the 8km Bletterbach gorge in the Dolomites. The steep terrain is known for its rockfalls, mudslides, freezing water, and flash floods. Home to 250 million years of geological history and an extensive fossil record, the gorge is central to D’Andrea’s story, anchoring it to a reality that could not have existed anywhere else.

Thirty years before the novel begins, three experienced hikers – Kurt, Evi, and Marcus – went deep into the gorge and were set upon first by an unusually powerful storm, then by one or more assailants who mutilated and hacked apart their bodies. By the time a four-man rescue team arrived, any forensic evidence had been washed away or was lost in the mud. The killer was never found.

The three deaths reverberated throughout the community, affecting not only the men who found them but also their families. Suspicion has fallen on a disappeared palaeontologist with some bizarre theories that Evi thoroughly discredited, on a wealthy developer who built a visitor centre on land her analyses had shown was unstable, on various members of the insular community, and even on the rescuers themselves.

Now, American television and filmwriter Jeremiah Salinger, his wife Annelise, and their five-year-old daughter Clara relocate to Siebenhoch. Salinger wants a few months to recharge his creative batteries. The location gives him the idea for a new television series about the work of Dolomite Mountain Rescue, an organisation started by Salinger’s father-in-law, Werner.

When Salinger tags along in order to film a rescue mission, an avalanche hits. The helicopter crashes as it is trying to pick him up and four rescuers and a tourist are killed. Salinger survives, but has numerous injuries and a case of post-traumatic stress disorder. With the book written in close first person, you’ll get a good understanding of his guilt over the accident, how frightened he was as the avalanche struck, and how his judgment has been impaired by the experience. The booze doesn’t help.

To distract himself, he starts investigating the 1985 Bletterbach murders, but it’s soon apparent that no one wants him to. Certainly not the surviving rescuers. They have been eaten alive by the horror of the crime and their own failed efforts to find the culprit. Certainly not members of the community, hopeful tourism will bring the local economy to life, and resentful of Salinger over the helicopter crash. Certainly not Annelise, who sees him withdrawing into an obsessive quest.

As each layer of enquiry peels away, new questions and theories emerge. Even though he knows he should give it up and repeatedly promises to, the mystery comes back to ensnare him again with some tantalising new clues. D’Andrea frequently introduces new information through the device of a community member offering to tell him a story, which is a powerful enticement for his readers and his protagonist.

Salinger’s relationships with Annelise and Werner are well described, but especially engaging is that with his daughter Clara. Their word game – she loves to spell – is a theme throughout, which starts off charming, but becomes ironic when, despite his obvious devotion to her, he puts his off-the-books investigation before even her. He calls her ‘eight letters’ (honeybun) and ‘ten letters’ (sweetheart). It’s almost a metaphor for the hidden communication going on all around them.

The truth, ultimately, may cost everything dear to him – his marriage, his family – but in the grips of efforts to understand the evil beneath the Bletterbach, he persists. Sometimes you just want to shake him. The book was heavily promoted even before the various publishers settled on a title. It appears variously as The Mountain, Beneath the Mountain, and in the original Italian, La Sostanza del Male (The Substance of Evil).