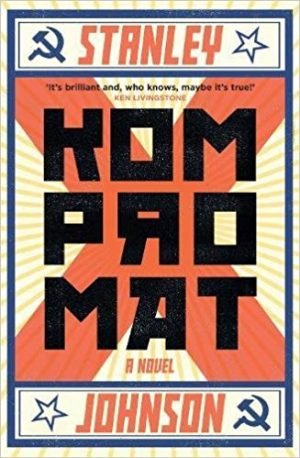 Written by Stanley Johnson — If you’re one of the millions of people on both sides of the Atlantic who look back on the votes of 2016 and say, to yourself or at the top of your lungs, “What just happened?” this new political thriller is for you.

It’s a hilarious roman à clef whose characters are such thinly disguised versions of today’s leading political figures, you can be forgiven for thinking you’ve inadvertently picked up a recent copy of The Times. Much-needed is the list of its many characters—from the US, Russia, Germany, China, Australia, Ireland, the European Union, Turkey, four ‘key animals’ and, most numerous of all, leaders of the UK. Kompromat is a Russian word that is a portmanteau meaning compromising material, and it seems most of these countries hold plenty of it on each other.

As the book opens, a 2016 US presidential candidate is participating in an international wildlife expedition that hopes to radio-collar a tiger. The British member of the expedition notes that aside from the candidate’s off-putting style, his countrymen are taking exception to the man’s message. “‘Build the Wall!’’Drain the Swamp!’ ‘Lock her up!’ Strong meat indeed.”

He’s taken to a hospital where the Russians plant a bug, in the wound the dart made. The CIA, ever on the ball, figures this out, and removes it, placing their own bug elsewhere in his body. And they’re not the only ones. By the book’s end, the new president has been unwittingly broadcasting to multiple countries, hostile and friendly, far and wide.

Meanwhile, the British have problems of their own. The environment secretary is approached by the Russians, who have singled him out as a leading light of the Eurosceptic wing of the Conservative Party. He’s given material indicating the Prime Minister agreed to the Referendum on EU membership for a reason no more complicated than money. Apparently, he believed the vote would never actually come to pass and, even if it did, it wouldn’t succeed. In that way, the Conservatives would receive money for doing nothing. This skulduggery causes the secretary to resign and campaign relentlessly for the referendum.

While author Johnson devises numerous amusing and convoluted scenarios in which the hapless politicians become entangled, occasionally his true feelings about these recent political trends shine through. An example emerges when the home secretary, who has been investigating the ‘cash for referendum’ dossier, confronts the prime minister, saying, “Forget about brown envelopes full of fivers in exchange for a [sic] putting down a few Parliamentary Questions,” Mabel Killick continued. “Some would say that the whole future of our country seems to have been up for sale.”

In Johnson’s scenario, these byzantine schemes were organised and carried out by the Russian security service – the FSB, heir to the KGB – in an operation called Tectonic Plate, “…designed to change the whole structure of international politics.” Sounds about right, some days.

The book is not only entertaining, it makes you think ‘what it?’ and as more news drifts out of world capitals, perhaps that question changes to ‘why not?’ Stanley Johnson is a former politician and member of the Conservative Party, and a former employee of the World Bank and the European Commission, who has held a number of prominent environmental posts as well as being an environmental activist. In the time preceding the Brexit vote, he co-chaired Environmentalists for Europe. Although he’s on record as opposing the referendum, his son Boris was a key leader of the Leave campaign. The book is in development for a six-part television series for Channel 4.