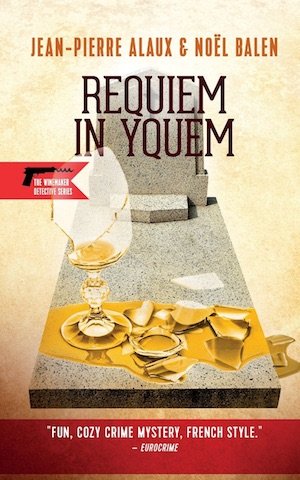 Written by Jean-Pierre Alaux and Noel Balen, translated by Sally Pane — The Winemaker Detective Series seems to be one of the most popular offerings from independent publisher Le French Book, which translates a wide range of French crime fiction, from eco-thrillers to police procedurals and cosy crime fiction. Requiem in Yquem falls firmly in the cosy category, steeped as it is in detailed descriptions of long lunches paired with the best wine vintages.

This time we are in the Sauternes region close to Bordeaux, where the famous white dessert wine is produced. The grapes are picked very late, just when they are starting to raisin, and the frequent mists in this microclimate infect the grapes with something known as ‘noble rot’, which gives the wine a very distinctive flavour. These Sauternes wines are difficult to produce, some harvests are unsuccessful, so that explains the high prices they fetch on the market. Chateau d’Yquem is a real wine, one of the most respected and most expensive of these, and it lies at the very heart of this investigation.

The book begins with a touching description of an elderly couple surprised in their bed at night by an intruder. They die holding hands, but nothing seems to be missing from their house. Not that there was much to steal. They lived a modest life, raising their granddaughter after her parents died in an accident. Wine expert and amateur detective Benjamin Cooker becomes interested in the case partly because of his fascination with the Chateau d’Yquem wines, but his assistant Virgile has a more personal connection with the village of Bommes, where the couple died. He reestablishes links with Jeremy, an old school friend of his from the area, and soon they are all questioning the arrest of a young junkie by the local police. The villagers are also keen to point the finger of blame at the hippy granddaughter, who left the village to become a model and actress in Paris, but Virgile is too charmed by her to believe the rumours.

Cooker does his usual nifty balancing trick – he’s not deliberately provocative yet still challenges the investigation run by the local detective, who in this case is Antoine Barbarous. Like his name suggests, Barbarous might be rough around the edges but is nevertheless quite shrewd. The detective’s team is far too keen to wrap up the case quickly. It soon becomes clear that this was not an opportunistic small-time robber, but a well-planned and well-executed murder. The trouble is, motive is difficult to establish. It will take a trip to London to see Benjamin’s brother Edward before the case can be solved and it is great fun to see the culinary highlights of London through a French author’s eyes.

Let’s be honest here: nobody reads the Winemaker Detective series for the complexity of the investigations or any unexpected twists. The culprits are easy to spot quite early on, but the charm of the books lies in visiting the different wine-growing regions of France, finding out more about the local producers and assisting in the gradual unveiling of the truth, mainly through conversations carried out over delicious meals. The secondary characters are occasionally walking stereotypes, some of the dialogue comes across as clunky… and yet this is a perfect palate cleanser of escapist crime fiction when you need a break from the daily news. One of the strengths of the series is the gradual development of the relationship and teamwork between the two amateur detectives. By this point in the series – book 13 – there is a high level of mutual understanding, respect and comfortable companionship, somewhat like an old married couple.

Additionally, this particular edition has a more elegiac tone, as Virgile and his friend Jeremy reflect upon the past, their aspirations and the choices they made. The footloose charmer Virgile is showing signs of maturing, and there are deeper questions being asked about friendship, morality and ageing, which might come as a surprise if you are familiar with the earlier books. Nevertheless, this remains a light, pleasant and informative read, a perfect travel companion for the Gironde area of France.

We’ve previously reviewed Cognac Conspiracies and Nightmare in Burgundy from this series. For a different escape to France try our photographic tour of Maigret’s Paris.