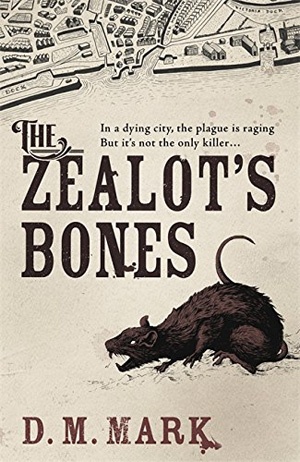 Written by DM Mark — In David Mark’s Aector McAvoy novels, Hull is a hotbed of violence and murder. The former Yorkshire Post crime reporter is known for cutting to the dark heart of Hull as it is now, a city this year making a name for itself as UK City of Culture. With the Hull Noir crime fiction festival featuring Mark as one of the featured writers, it isn’t a bad place to be for lovers of dark crime fiction. But Hull hasn’t always been the dark and bleak place of the Aector McAvoy novels; it turns out it used to be much darker and bleaker.

The Zealot’s Bones marks an abrupt shift for David Mark, into the realm of historical crime fiction. The year is 1849, and Kingston upon Hull – to use its proper name – is being ravaged by cholera. Mark’s dark, atmospheric style of slides effortlessly into the early Victorian era, painting a picture of Humberside brought to its knees by disease and squalor. In the Hull presented in The Zealot’s Bones, there are few households not touched by the disease, which metes out a long, agonising death. Because everyone is a potential carrier, fear and paranoia can be found around every corner.

Meshach Stone is a traveler, a soldier who made and then lost his name is Afghanistan. Court martialled for desertion, he travels through Europe in order to once again find himself in the arms of Laura, a young prostitute in Hull who means the world to him. In his weaker moments, Stone allows himself to believe she feels the same way. Sadly, when he finally reaches the city Laura is dead, and it’s not the disease that took her.

Biblical and allegorical names feature heavily in The Zealot’s Bones, and Stone has travelled to Hull with a moneyed Canadian named Diligence Matheson who seeks the bones of Simon the Zealot, one of the minor apostles of Jesus. The zealot’s bones are supposedly interred in a small church outside Hull, and one of Stone’s tasks is to help with the excavation. The search doesn’t last long. As soon as Stone hears of the brutal murders of Laura and several other prostitutes he is off to the slums to find his revenge.

In a country mansion belonging to Lord Ansell, a collector of biblical relics, Stone finds dark family secrets, as well as a rat catcher, a horrid man making a living out of the gentry’s fear of vermin. You will meet an array of other characters, each with their own backstories, bringing added colour to the novel. A couple of them feature predominantly as red herrings, making the twisted ending even more of a delight. This is a book we recommend you read right through in one sitting.

There is more buildup and atmosphere in The Zealot’s Bones than action, setting up an explosive and thoroughly unpredictable finale. The scents, sounds and squalor of Hull are all so real you’ll feel as if you’re really there, reminiscent of the Paris set out in Perfume: The Story of a Murderer. The plot itself is a straight-up revenge tale – a strong man with a dark past who’ll do anything to track down and eradicate his target. Parts of the historical detail don’t feel quite right, and the language is at times a mix of modern and vaguely old. A great deal of the action is also written in the present tense, which jars with the notion that we’re going back into the city’s history, but the intensity and atmosphere are well created.

It’s always good to see an author move out of their comfort zone and thrive, and the tense, twisting nature of Mark’s work slots perfectly into the mid-19th century milieu. The Zealot’s Bones is gothic, grim and mysterious, and whether the author moves on to a different time or stays in the Victorian era, if his next book is of the same calibre as this one it’s certainly one to look forward to.

We interviewed David Mark back in 2013 just as his second novel, Original Skin, was being released.