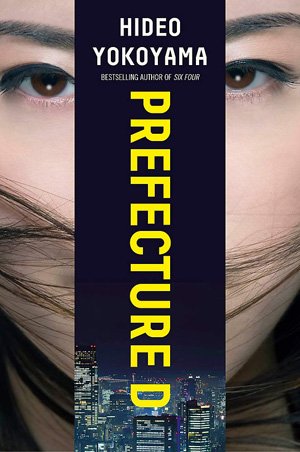 Written by Hideo Yokoyama, translated by Jonathan Lloyd-Davies — Prefecture D is the third book to appear in English translation by Japanese crime author Hideo Yokoyama, whose English debut Six Four was a big hit in 2016. Like Six Four and Yokoyama’s English follow up, Seventeen, it draws heavily on the author’s experience as a reporter for a small newspaper in regional Gunma. It contains a set of stories, loosely tied together, and like Six Four and Seventeen, the focus is more on the relationships and tensions between officers in the highly structured and hierarchical Japanese workplace.

Prefecture D is in a mountainous location somewhere in the middle of Japan, unnamed save for its initial. There are no prefectures in Japan beginning with D, however the television series based on Yokoyama’s Prefecture D stories was set in Yokohama, the capital of Kanagawa prefecture. Prefecture D was also the setting for Six Four, and featured some of the same officers in the Internal Affairs, which manages the job roles of police employees and investigates and disciplines any who transgress the rules.

There’s a delicate balance between the small prefectural police force, whose members are each gunning for promotion, and the National Police Force, which fills all the best positions with officers from Tokyo. In each of the four connected stories, the same characters drift in and out, and some of the themes repeat themselves. The difficulty of putting your employer above your family and your own health, the need to save face and the conservative nature of the Japanese workforce may not sound like the most exciting basis for crime fiction, but Yokoyama’s strength is the way he highlights the motivations behind the individual police officers, and delves deep into the crimes they commit.

In the first story, Season of Shadows, Shinji Futawatari from Personnel is tasked with reshuffling the roles of senior officers and those who have retired from active duty but still have cushy positions and salaries because of the way seniority is revered in Japan. After finding a creative way to move a captain from a rural station whose transgressions were in danger of being leaked to the press, Futawatari is shocked to hear that a former inspector is refusing to relinquish his position. He sets out to find out why, and stumbles upon the one case that the veteran homicide could never put behind him.

In the second story, Cry of the Earth, Takayoshi Shinto from Internal Affairs receives an anonymous tip-off about a station captain having an affair with the Mama-san of a seedy bar in the red light district of his small town. It smells of deceit, but the question Shinto must answer is who is doing the deception, and who is being deceiving?

The third story, and the most interesting in the way it exposes the toxic culture of the Japanese workplace, is Black Lines. In it Section Chief Tomoko Nanao, the woman in charge of the force’s 49 females officers, finds that one of the most promising ones has gone missing. In a nation with very rigid gender roles, particularly in the workplace, the barriers women cops face are mind-boggling. Nanao seeks out the young officer and finds that she has been the victim of a cruel power play.

In the final story, Briefcase, Yokoyama’s talent for creating tension and anticipation from what would, in the hands of any other writer, be a mindlessly dull plot, shines through. In it a wronged politician is preparing to have his revenge during a routine press conference, and political liaison officer Tsuge must stop him in order to protect the reputation of the force. When reasoning with the veteran politician doesn’t work his next tactic is to attack, but it backfires in a way he never could have predicted.

Fans of Japanese crime fiction, or any crime fiction that gives an insight into another country and the psyches of the people who spend their lives there, will find a lot to love in Prefecture D. It is both a slow burner and a quick, compact page-turner. It reads like an introduction to the Japanese workplace, a rather mundane theme that manages to turn into something much bigger and more poignant.

Listen to the first two chapters of Six Four. For more Japanese crime fiction check out Newcomer by Keigo Higashino.