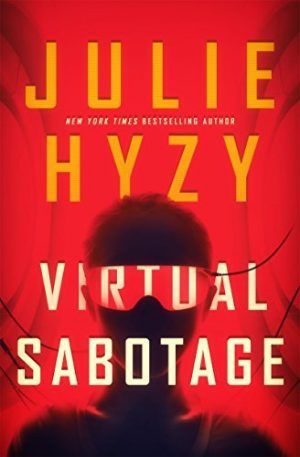 Written by Julie Hyzy — In a year when information technology’s dark side has been prominent in the news cycle, author Julie Hyzy presents a cautionary tale on the potential perils of virtual reality. Picking up on the addictiveness of online gaming, she has envisioned an American society where people are so tied to entertaining themselves in virtual worlds that they neglect to maintain the reality part of the equation, the structures of everyday society.

The protagonist in this near-future tale is Kenna Ward. She’s an envoy, a person who doesn’t hang out in virtual space for entertainment, but because it’s her job to rescue people who get into trouble, people for whom the imaginary becomes too real and, occasionally, life-threatening. She works for AdventureSome, a franchise of the company Virtu-Tech, which makes the most realistic and convincing VR components. Clients use AdventureSome pods – think 21st century telephone booths – to access the scenarios they imagine.

In an early scene, Kenna enters a jungle world to find her fiancé Charlie, also an envoy, who has taken a client into a scenario without authorisation and without the proper safeguards. He’s in trouble, and after a harrowing journey she discovers him near death. The envoys’ mantra is ‘This isn’t real. You are in control. Nothing bad can happen.’ She repeats these ideas to Charlie, but he rejects them. And this scenario doesn’t seem all that benign to Kenna, either. After her failed efforts to save Charlie, she is left with what feel like real injuries.

With her colleagues at AdventureSome, she begins questioning the anomalies she observed in that particular jungle scenario. Events occurred there that should be technically impossible. Beings attacked Kenna that she believes were not just software, they were sentient. There were other anomalies the program usually doesn’t allow. After Charlie’s death, Kenna is determined to find out who hacked the scenario and how they did it – in essence, who murdered Charlie?

As she investigates, she learns about a rogue group of programmers trying to sabotage Virtu-Tech. To her surprise, it appears Charlie may have been one of them, but she can’t believe he would have kept that a secret from her.

This is a multiple point-of-view thriller, so you are introduced to the people who run Virtu-Tech, and realise at once that a much bigger game than hacking client scenarios is afoot. The company’s leader plans nothing less than national domination and the destruction of citizens’ free will. It’s a race to see whether the dissident group can thwart the release of new technology that will give the company unprecedented powers of mind-control. There’s a strong whiff of Aldous Huxley’s Brave New World about the corporation’s plans.

Every reader has a different threshold of believability. Some sci-fi readers like authors who explain their technology so thoroughly that they believe they understand it, at least enough not to be constantly wondering ‘how could that happen?’ Others want to plow ahead with the story and devil take the details. For my taste, Hyzy’s world was not as real as it needed to be to suspend disbelief.

How well does the book stand up in conventional ways? The chief antagonist and her minions are little more than cardboard characters. While I admired some of the good guys their dialog, especially early on, is unconvincing. Much of the action takes place in virtual reality, at the AdventureSome facility, and at various Virtu-Tech offices and warehouses. You’ll find very little of the surrounding city of Chicago in it. Nor do you see many trappings of normal life. That lack contributes to a feeling that the story is playing out an empty stage set.

Hyzy’s premise – virtual reality used for mind-control – is certainly intriguing. However, I couldn’t help feeling that, by defaulting to a far-fetched national domination plot, she missed opportunities to exploit the potential terrors of a world in which virtual reality and actual reality collide. Because Hyzy is the author of two popular cosy mystery series sci-fi is a departure for her, and she deserves praise for going out of her comfort zone. Certainly, she constructed a crackerjack final confrontation that kept my eyes glued to the page.

To explore more potential linkes between virtual reality and crime, try Bullet Gal by Andrez Bergen or The Abomination by Jonathan Holt.