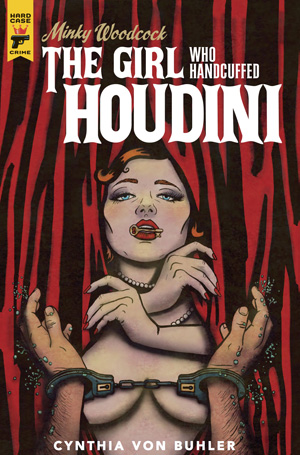 Written and illustrated by Cynthia von Buhler — Set in the 1920s, featuring a young woman detective with Sir Arthur Conan Doyle as her client, Minky Woodcock: The Girl Who Handcuffed Houdini is a graphic novel that will have crime fiction and comic book fans buzzing. Created by the multi-talented Cynthia von Buhler, it’s a mystery with surreal and slightly raunchy touches, and quite a few in-jokes for fans of detective fiction on both sides of the Atlantic.

Minky is covering for her father and brother at Woodcock & Son Private Investigators. She’s busy writing a letter to Agatha Christie when Arthur Conan Doyle steps through the door and grabs her pet rabbit by the ears. Minky is not impressed with him at first, but realising who the gentleman is she impresses him enough to give her a case. She’s tasked with investigating Harry Houdini’s spiritualist beliefs, even though Houdini has publicly denounced spiritualism and its practitioners. But first, she has to attend a séance with the celebrated medium, Margery of Boston.

This cues a bizarre encounter in which a buck naked spiritualist pulls a cheese cloth out of her mouth pretending it’s psychic ectoplasm, touches the private parts of those trying to contact their lost relatives, and has her assistant spray them with droplets of water from an old perfume bottle. This apparently represents the tears of the dead. Conan Doyle himself is at the séance with Minky, wearing a straw hat. The message they receive from the other side is that Houdini is blocking people’s access to the spirit world.

Again, Minky is not impressed but she continues pursuing the case and makes contact with Houdini’s wife who also hires her. Soon she has inveigled herself into the great escapologist’s show. But there’s all sorts of weird stuff going on. A suspicious nurse has joined the Houdini entourage as well, Bess Houdini seems to have been poisoned, Houdini has been injured practicing a trick. But that doesn’t stop him from taking Minky as his lover. The question is, are the spiritualists trying to assassinate him?

A fast-paced plot is peppered with sex and violence with lots of frantic panels and snappy dialogue. The artwork recreates a 1920s feel with yellowed backgrounds and a rough paper texture. The colours too are muted to match the aged newsprint feel, for richer and deeper tones that go well with a story that has mystery, circus and burlesque elements to it. With all that texturing, von Buhler keeps the line work itself simple, if a bit heavy, and avoids overdoing the detail. The story is fantastic, and there’s plenty of strange and funny stuff going on. Though Minky is clever, daring and vivacious, she is perhaps a little hard to engage with at an emotional level.

As we head towards 31 October 1926, the day of Houdini’s demise, it seems there’s nothing Minky can do to help Harry and Bess. But she can try to learn the truth behind what will happen to the showman.

Although fictional, von Buhler’s story does weave together real events as key plot points. Houdini did oppose spiritualism and appealed to the US Congress to have it banned. He was punched in the stomach by a Montreal student, who had connections to spiritualism and the occult. And he did indeed suffer mishaps and accidents in the run-up to his eventual death. Cynthia von Buhler’s Speakeasy Dollhouse Theatre Company in New York has turned the story into an immersive stage show with a tour of Houdini’s stage set, fortune tellers, a séance, a speakeasy and the chance to meet Minky herself… just be careful you don’t get handcuffed. This graphic novel has a high-quality, cohesive, vintage and lavish feel to it – something to be savoured as a hardback and read over again. A perfect gift too.

You’ll find lots more 1920s crime fiction to enjoy here. See below for some artwork from the graphic novel. 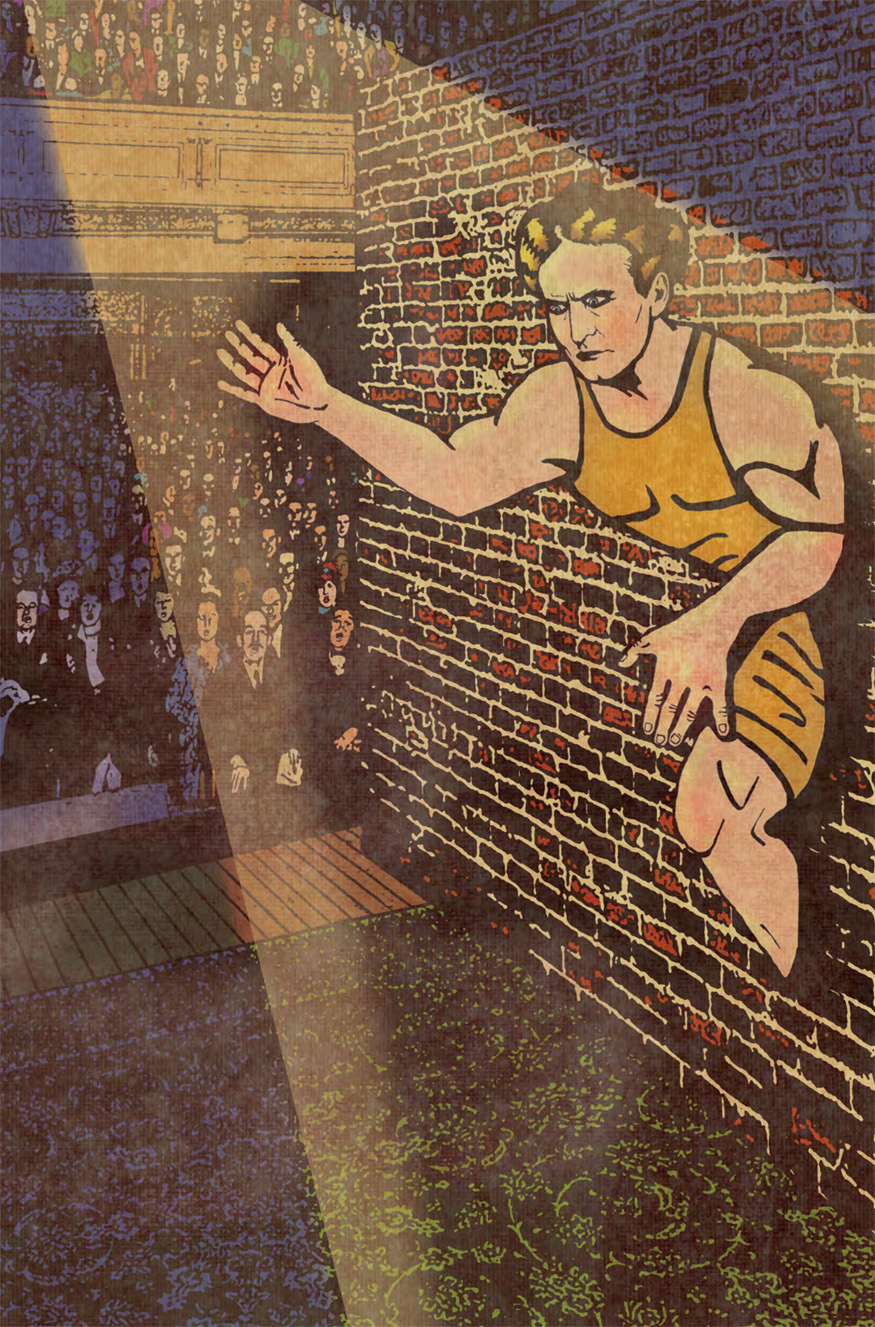 Conan Doyle reputedly saw Houdini walk through a wall, once. 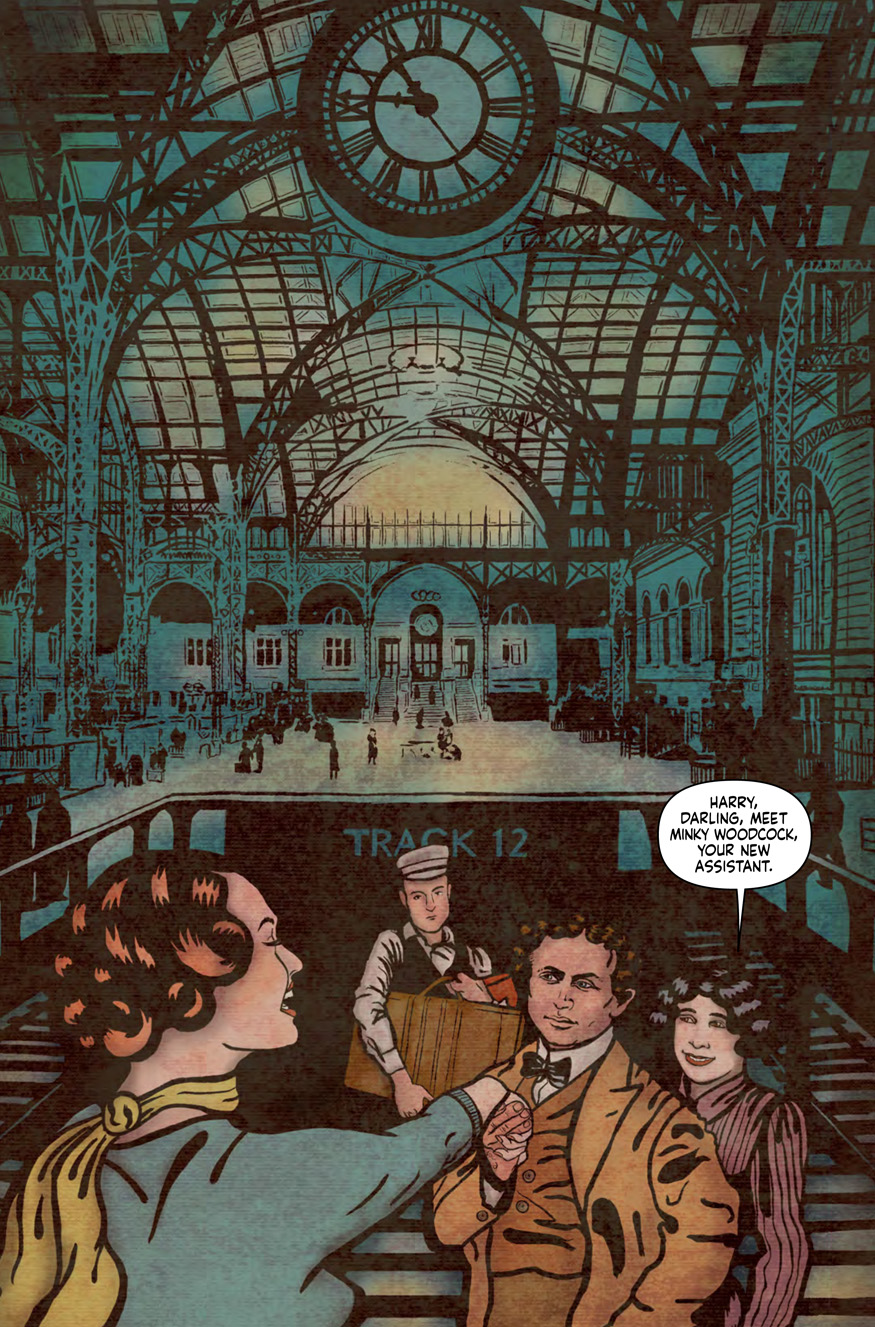 The beginning of a beautiful friendship, involving handcuffs. 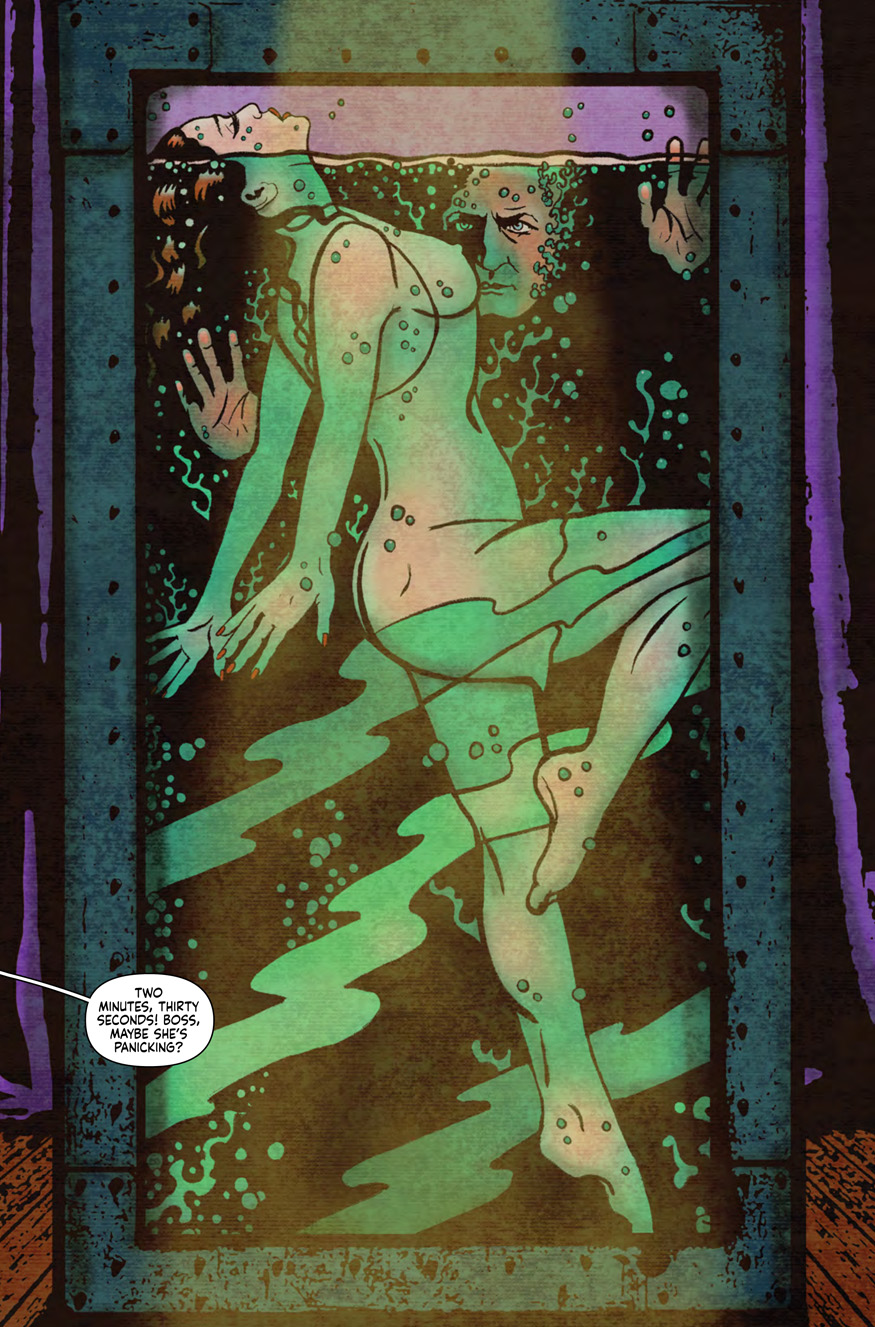 While Houdini is injured, Minky takes on one of his tricks. 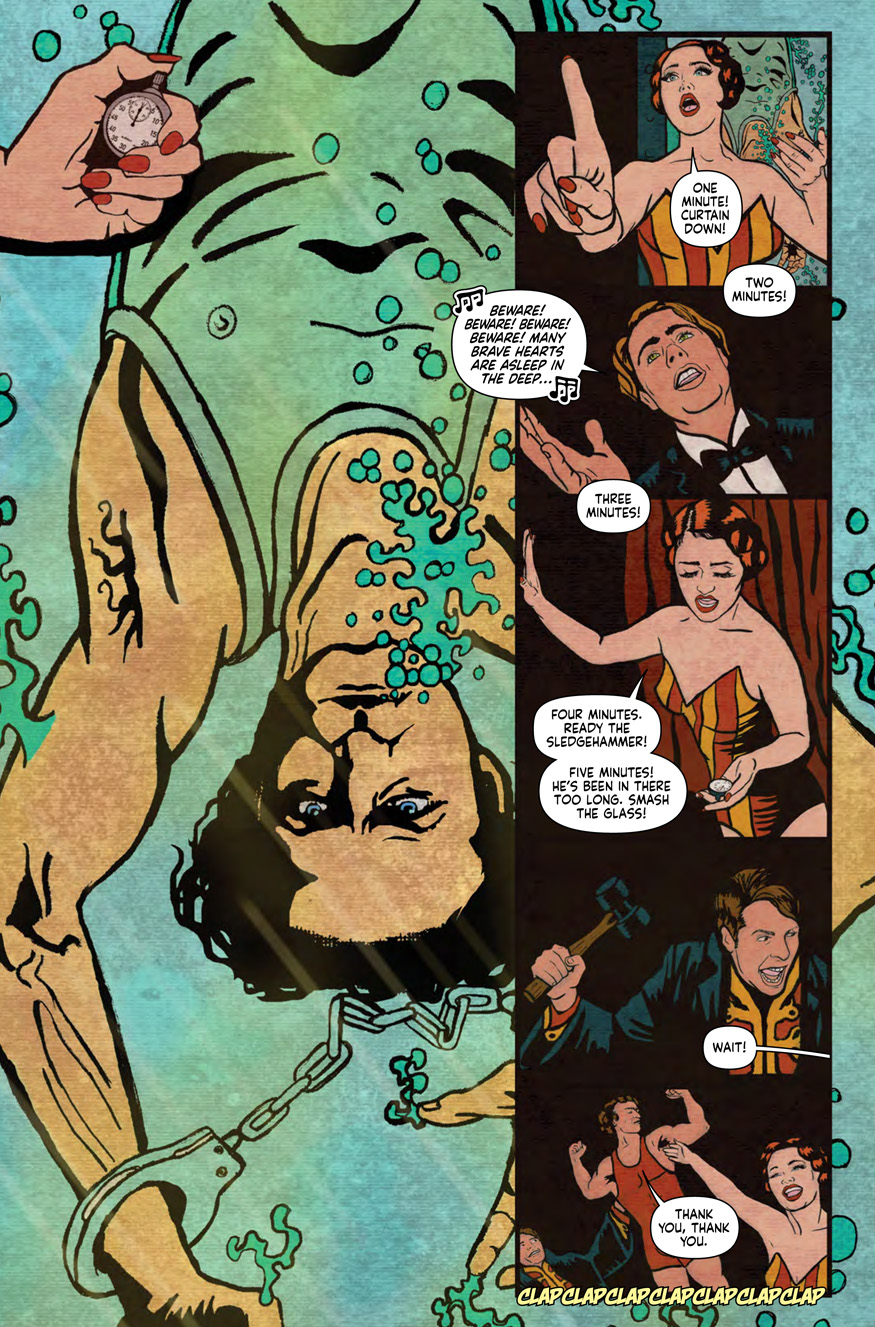 Water is the least of Houdini’s worries.