In the Galway Silence 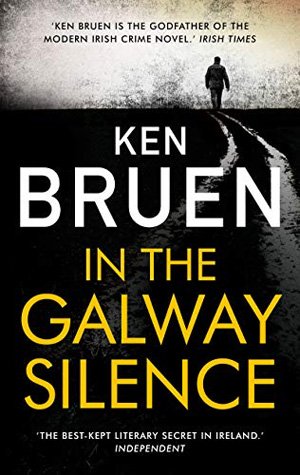 Written by Ken Bruen — In his latest novel, Ken Bruen – often called the Godfather of Irish noir – brings back his hard living protagonist, Jack Taylor. He’s an ex-garda man, now a private investigator and In the Galway Silence is his 14th outing.

But this isn’t the normal Jack Taylor. He’s actually… happy. Though he still pops pills and drinks plenty, it’s a massive improvement on his past. Taylor has a girlfriend, Marion, who has a bratty nine-year-old son called Joffrey – yes really – from a previous relationship. Joffrey is the only ding in Taylor’s shiny happy world. He has a new place to live, though still in Galway on the west coast of Ireland, and seems settled and more content with life, pleased to be unemployed and out of his old life, not willing to seek out trouble like the old Taylor.

No chance – because Taylor is a magnet for that kind of trouble. It arrives in the form of Pierre Renaud, a wealthy and entitled Frenchman whose twin sons, Jean and Claude, were murdered. The pair were tied to a wheelchair, their mouths glued closed before being pushed off a pier and into the waters to drown. The twins were no angels – it’s a surprise nobody had killed them sooner – but, intriguingly, the killer left a calling card stating: 2 4 J. Taylor isn’t keen, he’s done with that sort of stuff now.

Then Taylor makes a mistake, he does something good and saves a man called Tevis from drowning. However, he immediately regrets his charity because Tevis is rather intense and insists on attaching himself to Taylor.

Via Tevis, Taylor soon falls into the orbit of the twins’ killer – a vigilante who’s cleaning the streets of the bad guys and calling himself Silence. Now the killer has his sights on Taylor so, reluctantly, the detective re-enters the dark world he recently left behind to rid himself of the threat.

There isn’t another writer out there like Ken Bruen, and if there is then Bruen came first. Both Bruen and Taylor cut their own furrow in life. Taylor has to approach his cases in a certain fashion – the Irish way. Head down, run hard at the target. Like him or loathe him, Taylor isn’t bothered.

And so too the author… There’s a definite yeast extract (Marmite or Vegemite, you choose) element to Bruen’s writing. You’ll love it or hate it. He has a legion of loyal fans for good reason. Bruen’s style is for Taylor to switch back and forth between the ongoing story and his own internal thoughts, sometimes on matters not related to the actual plot. For example Taylor regales the reader with his views on the Catholic church and Donald Trump.

You may find this shift in narrative jarring. The prose is stripped right back to the bare bones, descriptions are brief and taut. Dialogue is only used when absolutely necessary and we spend as much time in Jack’s head as out of it. The narrative is gritty, bleak and full of black humour. Sometimes it’s written like a list with one word per line.

In the Galway Silence is a relatively quick read. Although the 14th in the series it can be read as a standalone. If you haven’t read the others you’re in for a treat – I recommend you head back to the beginning and read The Guards. Or check out the TV series entitled Jack Taylor, which is into it’s third season with Taylor played by Game of Thrones actor Iain Glenn.