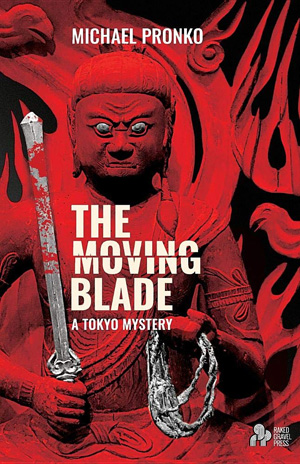 Written by Michael Pronko — Like Pronko’s debut crime novel The Last Train, The Moving Blade bills itself as a Tokyo mystery, a mystery intrinsically linked to one of the world’s biggest cities, written by an author who has lived there for an extended period of time and knows its numerous neighbourhoods well. Like The Last Train, The Moving Blade is detailed and compellingly plotted, and like Pronko’s earlier work, there’s enough here for both Japanophiles and those with little knowledge of the country.

Detective Hiroshi Shimizu is back. Well, actually, he never left. He hardly leaves his office at the Tokyo metropolitan police, where he works as an international liaison investigating financial crimes. It’s a dull job, but it keeps him busy, and gives him a chance to use the English he learnt while studying economics in Boston. Like many expats (or, in Hiroshi’s case, ex-expats) he feels torn between the two countries that he has called home, torn between his past and his present. The only solution he sees is to throw himself into his work, staying up late sifting through spreadsheets, sleeping on a futon in his tiny office, then waking up early for business calls from Hawaii or London. Hiroshi survives on double espressos and the occasional company of his assistant, until an old friend calls him up for a favour.

Homicide is investigating the death of a man in Shinjuku’s Golden Gai, a rabbit warren of tiny alleyways full of even smaller bars, establishments that can only serve a handful of people at a time. The victim is a Japanese man, cut straight through with a samurai’s short sword. The victim was found with some items from the home of Bernard Mattson, a career diplomat who was an important part of the formation of the SOFA – Status of Forces Agreement – which allows American armed forces to be stationed on Japanese soil with little or no Japanese oversight.

Mattson had developed a vocal opposition to the SOFA in the lead up to its renewal, almost 50 years later. He had been spending days in the Japanese national archives researching the agreement, and was to publish a book revealing the truth about US forces in Japan. But then he was killed, and his home burgled during the funeral. His daughter, Jamie, who has been brought up in America, wants to find out the truth. Since leaving Japan with her Japanese mother, she has lived in New York, and knows little of the country of her birth and its language. The people she meets are determined that she should carry on her father’s work, but she doesn’t know where to start. And she’ll soon find that she’s in a great deal of danger. The people who killed her father are prepared to kill again.

The novel is full of details about contemporary Japan and the controversies that dominate. The rise of the right wing historical revisionists, the unease caused by the triple disasters of the earthquake, tsunami and nuclear meltdown of March 2011, the tensions between American forces and the local population – all of these are dealt with in ways that give you enough understanding to gain a feel for the tensions of modern Japan. And Tokyo itself is presented beautifully, from the old houses or Asakusa, the Shitamachi (low town) area east of the Imperial Palace, to the myriad bars and tiny restaurants around Shinjuku, Michael Pronko knows Tokyo well and presents it as it is, not as one whole but as a diverse patchwork.

In some ways, The Moving Blade is a better novel than The Last Train. The plotting is better, the action and pacing build in a more measured way, a sign of a more experienced author. But there is no character that matches the enigmatic female killer in The Last Train. In fact, Jamie is a missed opportunity to create a strong woman character whose sense of being in between two cultures matches Hiroshi’s own. Instead, she is only ever represented physically, often through the eyes of Hiroshi, a man twice her age. In one early scene he marvels at her breasts: “American large and Japanese firm.” It feels unnecessary, even wrong. Beneath the over described physique, however, is a young woman whose character says a lot about living across cultures, and The Moving Blade would have been even better if she were allowed to come out more. But for anyone with a fascination or even a curiosity about Japan, this is a great crime novel.

For another American/Japanese cross-cultural mystery check out Sins as Scarlet.

By Sonja van der Westhuizen
Murder, kidnapping, blackmail and yakuza. American author Michael Pronko’s fifth novel in the Detective Hiroshi series has all the elements of a classic police procedural with a dash of extra action to raise the blood pressure. The Tokyo resident sets the novel in the city…
News

On the Radar: A whole lotta indie goin' on

By crimefictionlover
We head into September and the Autumn with a six-book line-up for you, made up entirely of novels from independent crime publishers and authors. With that scorching summer nearly behind us, it’s a great time to discover authors who are doing new and inventive things…