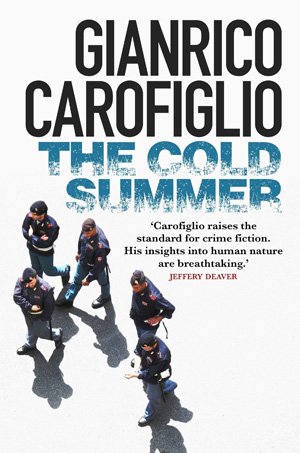 Written by Gianrico Carofiglio, translated by Howard Curtis — Real-life events from 1992 are woven into Gianrico Carofiglio’s fascinating contribution to Italian crime fiction. The Cold Summer is a high-stakes police procedural about the amputation of one small arm of the mafia in Apulia, a region that constitutes the heel of Italy’s boot.

Marshal Pietro Fenoglio is a carabinieri officer in the region’s capital, Bari, investigating the kidnapping and death of the young son of local mafia leader Nicola Grimaldi. Speculation is that rivalries within the ranks of Grimaldi’s organisation precipitated the abduction, as it’s one in a wave of occurrences linked to organised crime sweeping the area. A few weeks before the story begins, several of Grimaldi’s confederates were murdered, several of his chief lieutenants have disappeared and are presumed dead, and a mid-day shootout occurs in a small town nearby that empties the streets and leaves numerous spent cartridges but no victims.

Another missing lieutenant is “probably the most respected and certainly the most intelligent” of Grimaldi’s lieutenants, Vito Lopez, known as ‘the Butcher.’ The sobriquet comes not from his violence – although he certainly is a violent man – but from the occupation of his father. Fenoglio finds it interesting that Lopez’s wife and son have disappeared too. This suggests the family is in hiding, which makes Lopez a prime suspect in the kidnapping case.

Although the Grimaldi family at first will not admit the kidnapping took place or that they paid the ransom, the discovery of the boy’s body makes their denials moot. They likewise believe Lopez is the culprit. The growing rift in the syndicate could be a way to bring the family down, if only Fenoglio, his assistant Corporal Antonio Pellecchia, and his new boss Captain Alberto Valente can figure out how to do it.

The story is set in mid-1992, the ‘cold summer’ infamous in Italian law enforcement. First came the murders of prosecutor Giovanni Falcone, his wife and three members of their police escort in a bomb blast on a major highway in Sicily. Less than two months later, prosecutor Paolo Borsellino and five members of his police escort were murdered in Palermo. These real-life events shake up not only Carofiglio’s fictional characters, but the Italian people as well, leading to a crackdown on the mafia and new laws requiring harsher sentencing for convicted mafiosi. Carofiglio thus places his story in an era that was particularly dangerous and high-stakes for police, prosecutors, and criminals alike.

Carofiglio’s characters are believable, flawed, and interesting. The carabinieri, never free from the oppressive danger around them, move forward cautiously but with purpose. Fenoglio is especially articulate in his musings about the grey areas in society in which many people, including his colleagues and even himself and his investigation, often operate.

To everyone’s surprise, Lopez turns himself in. He knows he’s a dead man without police protection and maybe even with it. The interviews of him by Assistant Prosecutor Gemma D’Angelo are presented as question-and-answer transcripts, devoid of editorial comment, gesture or any emotion. This dry style is remarkably effective and makes Lopez’s confession even more powerful by its simplicity. If Lopez is to gain any benefit from his cooperation with the authorities, he must detail all his crimes. Despite the many things he confesses to, he is adamant in denying involvement in the Grimaldi boy’s kidnapping. On that crime, Fenoglio and Pellecchia appear to be back to square one.

One of Lopez’s revelations is that Grimaldi has been considering an attack on D’Angelo herself. If that threat is at first in the background, it roars to the fore when police boss Falcone is murdered. This would be an opportunity for the principals to back off, possibly even abandon the investigation, one in which clues are so sparse. You will be gratified that they do not.

When reading a book that has been translated, you can never be certain how closely the style adheres to the original. In this case, Howard Curtis has produced an English-language text that reads exceedingly smoothly, yet manages to convey the aura of the original Italian. You never feel as if you are reading a translation, but the original.

Carofiglio is an award-winning novelist and a Bari native. Well positioned to write Italian crime fiction, he has long experience as a prosecutor specialising in organised crime, which informs this well-crafted novel beginning to end. It’s a pleasure to read and to spend a little time (safely) in Fenoglio’s perilous world.

If you like books about the Italian mafia on its home turf, try Suburra by Carlo Bonini and Giancarlo De Cataldo (translated by Antony Shugaar).