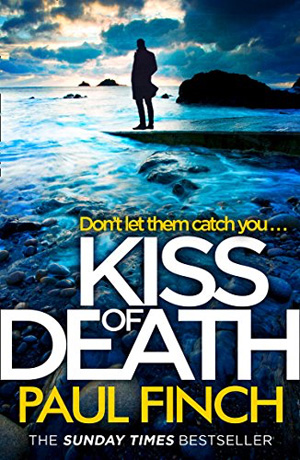 Written by Paul Finch — UK crime fiction stalwart Paul Finch has made an enviable career for himself, no doubt helped by his experiences as a policeman, crime beat journalist and screenwriter. His Heck series, featuring DS Mark ‘Heck’ Heckenburg of the National Crime Group’s Serial Crimes Unit, is now up to seven books, and have sold more than a million copies.

The books have a reputation for being packed with detailed and realistic police procedural work, as well as pushing at the boundaries of what is considered the acceptable limits of physical violence within mainstream crime fiction. In Kiss of Death, Finch pushes them to breaking point, thrillingly so.

The prologue features a home invasion and bank robbery committed in 2014, with the thieves escaping. The action then jumps to the present day as the SCU wraps up the case of The Black Chapel, a home-grown terror unit that under the influence of black metal music have graduated from desecrating churches to murdering priests. This particular crime has no connection to the main narrative, but may relate to the shock ending of the book which pretty much presses reset on the whole series and is bound to cause a commotion among its fans.

The success of the case is not enough to save the SCU from the effects of budget cuts. DSU Gemma Piper, boss of the SCU, has been fighting a losing battle to keep the expensive unit funded, and she tells the team that she has struck a deal with another unit under pressure. The Met’s Cold Case Team will be working with the SCU to find 20 of the country’s most wanted felons still thought to be on the mainland. It is hoped that some quick high-profile arrests can justify their continued operation.

The two units combine and then split into pairs, each pair seeking one fugitive. Heck is to work with DC Gail Honeyford, a new recruit to the SCU, but not unknown to Heck. They had a tryst at the end of a previous case. Their target is Eddie Creeley, the ringleader from the prologue. He hasn’t been seen since he went to ground in 2014, and their judgement is that his sister Nanette, who lives in Humberside, is the place to start; Creeley’s sadistic propensity for violence makes him a liability for even hardened criminals, and he’s unlikely to have been getting any support from the underworld in London.

Going undercover to her local pub, Heck and Honeyford establish that the barmaid is acting as a go-between Nanette and another local hard case. Honeyford, by no means a naive officer, wants to bring her in, and Heck wants to brace her on her way home. It’s a fine piece of writing by the author, exposing the differences between the two, and revealing how Heck works on the edge, justifying stretching the rules to get quick results, but prepared to put his hands up if things go wrong. The hard-bitten copper who has his own moral code may be something of a cliché, but Finch is so persuasive in his writing that it never grates.

As Heck and his colleagues at the SCU follow the links of evidence it becomes clear that the original case is spinning off into a more sinister direction.

There is much to admire in Kiss of death. Heck’s machismo is balanced with some vulnerability – doubts about his career and also his relationship with DSU Piper. The complex plot is handled expertly. Little clues that initially seem incidental gain added importance further down the line, and Finch makes excellent use of his knowledge of police work to keep the investigation understandable to readers. He kept my interest throughout, and though Kiss of Death is a long novel with much drama, I never got bored or fatigued. My only criticism is that Honeyford is side-lined around halfway through the investigation. The decision may have been true to what may actually have happened in a real investigation, but made less sense in a fictional setting.

If you’re still on the fence about the Heck books, take a look at our review of Hunted, the fifth book in the series. Meanwhile, I’ll be filling up my Kindle with the other books in the series.