Resume Speed and Other Stories 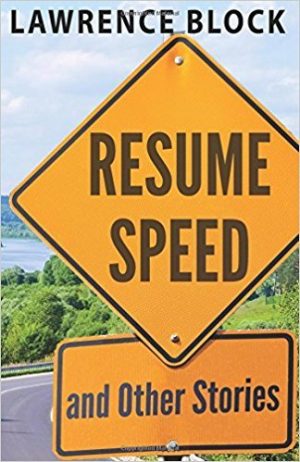 Written by Lawrence Block — This entertaining collection of short crime fiction combines old and new short stories, plus one novella by the award-winning and amazingly prolific American author Lawrence Block. Never before appearing in collections, the seven stories have been plucked from an 56-year period in the writer’s career. The earliest, Hard Sell, was published in 1960 and several of the most recent in 2016.

According to Block’s interesting notes accompanying each story, Hard Sell was originally published under another author’s name – not unusual in that era, apparently, and of course that still goes on today. Just ask James Patterson. The story itself is an entertaining bit of deduction with a twist at the end, in which the detective not only solves a series of murders but refuses to accuse the culprit. The distinctive character names are fun – Cowperthwaite, Kirschmeyer – especially the running gag that the detective can’t get Kirschmeyer’s name right. By the end of the story, he’s calling him Kicklebutton.

Many of the characters in this collection have idiosyncratic names, which means you’re not likely to lose track of who’s who. These are noir stories, generally, using Dennis Lehane’s definition of noir: in tragedy, a character falls from a great height; in noir, he falls from the curb. Most of Block’s characters are indeed perched precariously on the curb. They’re denizens of bars and cheap motels, rooming houses and cop shops.

Lawrence Block turned 80 recently and remains active on the New York crime fiction scene. His writing here is straightforward, unassuming and unsentimental, carrying you right through to those pull-up-short endings. Often they seem to be set in some ambiguous former era, before smartphones and DNA analysis changed the rules for cat-and-mouse games.

One of my favorites is Autumn at the Automat, a 2017 Edgar Award winner. Block’s ending took me totally by surprise and made me laugh out loud. A down-at-heels woman, watching every penny, takes her dinner at the automat. She’s clever in how she watches the other patrons and manager without ever looking in their direction, an exploitation of peripheral vision taught to her by her father. It’s a useful skill when she has to ensure no-one will foil her plans. According to Block, the story came to him upon seeing Edward Hopper’s painting Automat. His paintings are stories-in-waiting, and Block edited an entire anthology of Hopper-inspired fiction, In Sunlight or in Shadow, published in 2016.

I Know How to Pick ’Em and Gym Rat involve the durable premise in which a stranger approaches the first-person narrator with a proposition that he kill the stranger’s spouse, as per Strangers on a Train. These stories are intriguing in Block’s hands because his protagonists take a look inside. What makes a total stranger think he could or would do that? What does the stranger see in him? Haunting questions.

Resume Speed itself perfectly fits the noir definition above. Bill Thompson feels the need to get out of town, sure he’s committed some unremembered violence. He lands in a new spot with a job he’s good at and a girlfriend who fills all his requirements. But can he get out of his own way and let himself succeed? Drink is the problem. He can tolerate a little, but when he gets drunk, his memory goes and a violent streak emerges. Or he thinks it does. This isn’t a story with a plot twist like the others. Much as you want Bill to make a go of it in the little town of Cross Creek, you carry a load of unease that he will not. Block says this story is based on a true story he heard one night almost 40 years before he actually wrote it. A long gestation, but a productive one.