Death in the Woods 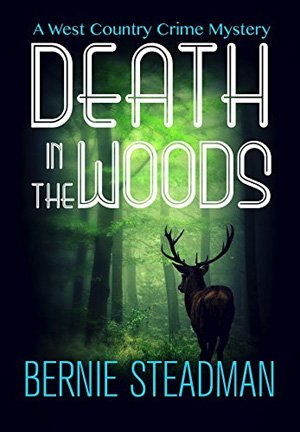 Written by Bernie Steadman –- The first book in the A West Country Crime Mystery series begins appropriately enough with a group of boys discovering the body of 16-year-old Carly Braithwaite in the woods behind St Andrew’s Academy, Exeter.

Carly was an unremarkable pupil at the school and her murder has brought her a notoriety she never achieved living. She was neither particularly liked nor disliked, but had recently gained some local fame for winning a singing competition. Her prize was some free sessions at a recording studio in the city, and hopes were high that a record deal might follow.

Meanwhile, Detective Inspector Dan Hellier finds himself back working in city he grew up in. It was never the plan, but a miss-step in the Metropolitan Police and the abrupt end of a relationship have sent him back to Exeter humbled but not defeated. So when he is partnered up with an experienced detective, Ian Gould, Hellier makes a play to be lead investigator.

For Hellier, the case is a little too close to home. His sister, Alison, is a heroin addict and currently in prison. Her life is chaotic, and her habit is maintained by theft and prostitution. She is a vulnerable woman, and it’s all too easy to picture her in Carly’s place – left for dead in a secluded area after meeting the wrong John.

There’s nothing to suggest Carly had such risky habits. A visit to her home, with Sergeant Ellis from family liaison, yields little of note. Her father, Alan, has a reputation as a hot head and brawler, and sure enough, he masks his shame about knowing so little about his daughter’s whereabouts by getting angry and threatening to the police. Carly’s younger sister, Jenna, reveals that she had a boyfriend, Jamie May, another pupil at the academy, and that the last time Jenna saw Carly, she was getting ready to go to Jed Abram’s studio with Jamie, for a recording session.

The author crafts a multi-layered police-procedural from these relatively simple beginnings. The plot develops in unexpected ways, and more than one crime is explored. The involvement of an East European mafia ring takes the book into surprisingly dark places. She takes Hellier through his investigation in logical steps, never cheating us with intuitive leaps that couldn’t have been made outside of a novel, and still manages to keep the results of the investigation a surprise.

Bernie Steadman’s greatest strength is how she depicts personal relationships; how Hellier allows his investigation to be put at risk by the charismatic Gould is a particular highlight. Jamie’s jealousy of Carly and Jenna’s sibling rivalry is also carefully teased out. In many ways, it would be easy imagining Death in the Woods as a TV pilot with a mostly young, diverse cast led by the affable Hellier that doesn’t just focus on the crime of the week but the developing friendships and rivalries between the cast.

But therein also lies the weakness. The characters themselves don’t develop much beyond the surface level. Perhaps that will improve through the series. The prose is a little clunky to begin with but improves as the author hits his stride. The style is simple and unadorned but effective, and actually suits the story well. Death in the Woods is a promising start to a new series.