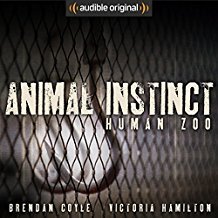 Written by Simon Booker — Animal Instinct is an Audible Original, narrated by Imogen Church with a strong cast portraying the characters. Former police detective Joe Cassidy (voiced by Brendan Coyle) has post-traumatic stress disorder, which has left him with debilitating panic attacks. They came on after a case in which Joe failed to identify a serial killer before he could murder his final victims. Now any reminders of that case can trigger an attack and you hear him trying desperately to hold his stuff together.

Despite trying to withdraw from the world by setting up in a derelict cottage on Dungeness Beach in Kent, the world comes to him when he’s contacted by an old friend he hasn’t seen in years. Adam Pennyfeather (Joseph Marcell) inherited a wild animal park, where Joe visited as a teenager and where he would have been trampled by an elephant if Adam hadn’t saved him. Adam’s daughter Bella has gone missing, and Adam wants Joe to help find her. As a friend. As someone who owes him.

Joe is also on hiatus from his marriage to Katie (Lia Williams), herself a police detective, who’s handling the investigation of Bella Pennyfeather’s disappearance. When Bella’s body is found in the elephant house, strung up like a side of meat, Katie is handed her first murder investigation. This creates inevitable tension between the couple, acting separately in their official and unofficial capacities. The tension increases when Joe tells his wife he believes their 20-something son Luke (Ed Bluemel) is lying about whether he knew Bella. Actor Bluemel is suitably evasive under his father’s questioning and, subsequently, effectively conveys a slacker attitude that infuriates Joe.

The Pennyfeather family gradually reveals itself to him. Adam’s wife is Isabel (Victoria Hamilton), and his younger daughter is Saffron (Rebekah Hinds). She and her husband, pizza entrepreneur Liam O’Mara (Harry Lloyd), tell Joe about Isabel’s lifelong loathing of her younger brother Felix, now Adam’s lawyer, and how Isabel preferred her daughters to her son Gabriel. His birth led to serious post-partum psychosis for which she was hospitalised. Fearing for the boy’s safety, Adam put him up for adoption many years ago, and has since learned that Gabriel died in a motorcycle accident.

Trying to worm her way into Joe’s orbit is the relentless local journalist, an Australian woman, Chrissy McBride. Brigid Lohrey makes this character so annoying that, along with Joe, you’ll probably think, “Oh, no, not her again!” The author makes McBride’s job a little easier by having Joe inadvertently reveal more than he should. When she asks, “Is it true that X?” instead of giving a nonanswer, he sometimes says, “How did you know that?” which confirms the rumour. Before long, though, he realises someone in the police force is feeding her confidential information.

If the murder, which soon becomes two murders, didn’t occupy enough of his attention, there’s the problem of his wife. He has reason to believe she’s seeing someone, was seeing someone while they were married, at least early on, and that Luke is this other man’s child. Three DNA samples sent to a Cambridge lab will tell the tale, but is that information he really wants? Booker builds a nice bit of tension around the receipt of these laboratory results, and with Coyle’s solid portrayal, you can appreciate how torn Cassidy is.

The production includes sound effects of the type a foley artist would deploy in a radio play to indicate a closing door, footsteps, and the like. Since it is also a reading of the full text, there are awkward moments along the lines of “(sound of door slamming and footsteps) Luke came in through the front door and walked to the kitchen.” Possibly this is a matter of personal taste, but the sound effects feel redundant and jar me out of the story. They subtract from, rather than add to the experience. However, the producers wisely deleted all the dialog tags (he said, she said), as being unnecessary here.

Animal Instinct is an Audible Original, is a nicely placed, complex story and billed as the first book in a series featuring Joe Cassidy. TV writer Booker will find his listeners looking forward to more.

Another homicide investigator who vainly sought the isolation of the Kentish coast was featured in William Shaw’s The Birdwatcher.