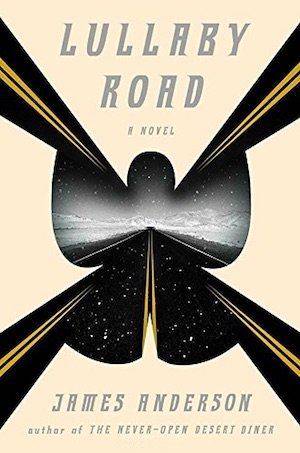 Written by James Anderson — James Anderson’s debut novel, The Never Open Desert Diner, recounted the adventures of short-haul truck driver Ben Jones, who drives a 100-mile stretch between two small towns in the high Utah desert. If the town of Price, Utah, is next-to-nothing, Rockmuse, at the other end of his route, is smack up against it. Jones drives the fictional highway 117 back and forth every day, delivering whatever people along the route need – groceries, water, auto parts, agricultural supplies, horse feed. In hot weather, it can be brutal.

Anderson’s books are literary novels, with elements of mystery and crimes of many kinds – the assaults and kidnappings and gun mishaps acknowledged by the legal authorities, and crimes of the spirit too. They are full of characters, since people who want to live well away from civilisation generally have their reasons. And they capture the essence of the high desert – its sunrises and sunsets, the brilliance of its stars at night, its smells, the amazing quiet, and its deadly hazards, human and otherwise.

In Lullaby Road, Jones finds himself in an especially tricky situation. On a winter morning he stops to fill up at the Stop ‘n’ Gone before starting his run to Rockmuse, only to be told something has been left for him out by one of the pumps. That turns out to be a Mexican child and a dog. A child not dressed for the freezing temperatures. The station owner has locked his door and doesn’t respond to Jones’s pounding. He has ‘no choice’ – a phrase Jones particularly loathes – but to take the child into his truck’s warm cab and sort things out later.

This is bad enough, but his young neighbour, Ginny, who saved his bacon in the previous book stops him before he can exit the truck stop and hands over her infant daughter. She has a litany of issues, and has ‘no choice’ but to ask him to take her baby for the day. Like it or not – and he does not – he’s left holding the diaper bag. So now you understand the book’s title.

Jones’s regular route is rough, subject to severe winds and torrential rains. In winter it may be at its worst, when blinding snowstorms barrel over the mountains, scouring the land and hitting the mesa to the east, only to come back to strike another blow on the folks in between. With its margins indistinct in the blinding snow, it’s like driving into oblivion.

Yet the child, the protective dog, and the infant Belle turn out to be good travelers. Belle mostly sleeps as Jones negotiates the road. The child doesn’t talk. Eventually, you find out why. Crimes have occurred in the desert that no child should have to witness. Jones has seen a lot and doesn’t expect much from humanity at its lowest, but even he is not prepared for the gruesome discovery the child leads him to.

On his hazardous journey with the kids, Jones encounters several of the area’s notable characters, including John, who trundles his heavy cross up and down the highway, regardless of weather, and Walt Butterfield, known as the owner of the Never Open Desert Diner, but not as the murderer of the four men who raped his wife. Guns are pulled on him more than once.

Jones does make it to Rockmuse on this inauspicious day, and temporarily turns the children’s care over to a woman he trusts when other, worse considerations necessitate. A hit-and-run driver has critically injured John, his body found when someone noticed his cross alongside the road. Author Anderson does a great job describing the constrained possibilities available to people in remote locales, without resources, and with limited access to communications, helicopter airlifts, and other take-for-granted trappings of modern life. Jones tries his best to overcome these difficulties. Much as he hates it, ‘no choice’ often is the choice.

The characters in this book were just as strong and interesting as in Anderson’s first, though it seems that Jones has changed. There is an occasional streak of meanness in him I hadn’t detected before. Perhaps this is the result of his earlier experiences, or perhaps Anderson himself sees this character differently. Yet, you do believe that Jones ultimately will move forward, unshouldering the weight of the past, even as he continues to retrace, back and forth, his daily journey.

Everything doesn’t turn out well for all the eccentrics and lost souls who people this novel. At the same time, it is generous in acknowledging that good people can make bad choices, it grieves for the innocent, and it leaves open the expectation that bad people may yet get what’s coming to them.

Like stories set in the American West? Try Steven F Havill’s Posadas County Mysteries or J Todd Scott’s The Far Empty. For the magnetic attraction of an isolated setting, see Hold the Dark.