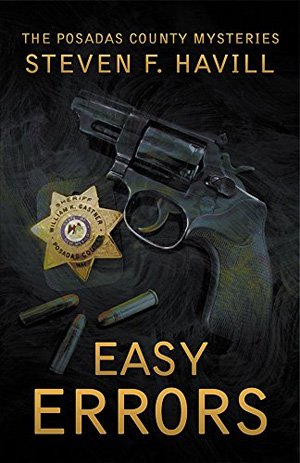 Written by Steven F Havill — This is book 22 in Steven F Havill’s Posadas County (New Mexico) mystery series and is a prequel to the earlier books, which began with 1991’s Heartshot. Demonstrating how reader opinion is more than background noise to some crime fiction writers, Havill says this story sprang from a request for more information about Sheriff Robert Torrez’s early career. It’s a testament to how well the author knows and understands his characters that he can reach back in time and conjure their younger selves.

Narrated in the first person by Undersheriff Bill Gastner, the book begins with him relaxing with a book one Wednesday night, interrupted in the third paragraph by the shriek of tyres and a dull bang. A vehicle has crashed disastrously somewhere nearby, so Gastner alerts the sheriff’s dispatcher and sets out to find the source of the noise.

It isn’t pretty. A Chevy Suburban looks to have flown too fast off the interstate exit ramp, cartwheeled, and come to a stop when it hit a concrete support pillar. One teenager’s body lies outside the wreck; two more inside. Havill’s clear writing makes the scene especially vivid.

In a small town, everyone knows everyone else, and the sheriff’s personnel immediately recognise the car and know its driver is Chris Browning, the 16-year-old son of the county’s assistant district attorney. The identities of the other two victims are equally quick in coming. They are the younger brother and sister of Robert Torrez, new Posadas County deputy. He’s not even officially on the job until the next morning, but is on a ride-along that evening with another deputy.

What follows over the next few days is the meticulous reconstruction of the events that led to this tragedy. You might think an auto crash could not sustain our attention for an entire novel, but Steven Havill’s skill lies in making this police procedural absolutely riveting. It proves that a crime story doesn’t have to trot out a demented serial killer or imperil the US president and all of Congress in order to have stakes worth caring about.

As the ripples from the evening’s events expand, they involve more and more community members in various ways, showing how the painstaking work of the investigators is essential to its healing.

Robert Torrez turns out to be a dogged investigator. While Bill Gastner and the rest of the deputies keep waiting for him to crack, he turns his grief and anger into unrelenting effort. Each of Havill’s characters is intrinsically interesting, and it’s equally interesting to see how they work together as a team, which includes working around some spotty (and humourous) assistance from a few dispatchers.

The care that Havill takes in reconstructing the crime and establishing the officers’ logic in developing every last bit of evidence holds until near the book’s end, when the prosecutor, speaking before the grand jury, claims a type of evidence the authorities do not actually possess. While the grand jury might reach the same decision with or without it, its decision is based on a totality of evidence, and the total is flawed. It doesn’t appear that the prosecutor made the mistake purposefully or was even aware of it, but in a novel so thoroughly grounded in the step-by-step accretion of facts, this introduction of false evidence is jarring, and the book’s title Easy Errors turns ironic.

Still, this slip-up isn’t enough to discourage me from wanting to read more Posadas County mysteries.

If you’re a fan of police procedurals also see The Late Show by Michael Connelly or Carol Wyer’s The Missing Girls. For more of the American West try The Never Open Desert Diner by James Anderson or The Far Empty by J Todd Scott.