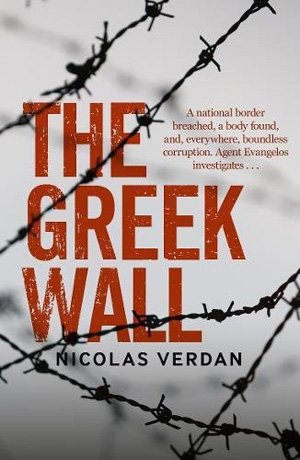 Written by Nicolas Verdan, translated by W Donald Wilson — The refugee crisis has been front-and-center in the news media for so long it’s become easy to tune it out. But award-winning Swiss author Nicolas Verdan’s literary crime thriller takes a refreshingly different slant on the topic underscoring how wide its ripples have spread in European society. All the horrifying consequences of what happens when groups of people are ripe for exploitation make this a juicy topic for crime fiction lovers.

It’s 2010, and Agent Evangelos of the Greek National Intelligence Service wonders what a severed head – not any severed head, but the actual one that has been brought to his official attention – looks like. So he travels from his Athens office to the northern city of Orestiada to see it. Is it the head of a Westerner? That’s what Evangelos’s superiors want to know, and they want the answer to be ‘yes’.

Verdan’s novel – his first available in English – is part political thriller, part police procedural, and part mystery. A brief prologue offers hints regarding who it is who has lost his head, but the circumstances are murky. What is clear is that a disembodied head couldn’t have ended up in a worse place. Finnish members of the European Border and Coast Guard (Frontex) found it in the politically tricky far eastern area of Greece, near the bank of the Evros River separating Greece and non-EU Turkey. This strip of land is not only Greece’s border but that of the EU’s passport-free Schengen Area – in a sense, all of Europe.

Greece is the main crossing point for refugees into the European Union, with tens of thousands of people pouring into the country every year. Some European leaders have been unsparing in their criticism of this porous border, saying that if a member state can’t control its borders it shouldn’t be in the Schengen Area.

As a result, Evangelos is told not to push too hard with his inquiry in case it leads to further embarrassment for Greece. If word got out about the beheading, it could derail proposed EU funding for a Trump-like wall along the Greek-Turkish border. With Greece is in the throes of its financial crisis, the country can’t possibly afford such a wall on its own. This novel is based on the true story of the jockeying to get that 10-mile fence built.

Much of this sensitively written novel gives you a close-up look at Evangelos, who takes the constant reversals of policy and direction in stride by ignoring them. Perhaps it’s because he’s within a couple of years of retirement or perhaps it’s his steadfast commitment to the truth – for whatever reason, he focuses simply on solving the crime. Novels based on current affairs often run the risk of becoming outdated, but the essential humanity of Verdan’s characters gives this story a timelessness.

The precise spot where the head left its body is on the grounds of a seedy brothel called Eros. Agent Evangelos discovers that the brothel is the playground of the Frontex officers. Many of the girls are Russian teenagers, victims of human trafficking schemes, and the officers give them hallucinogens in order to engage with them in violent sex games.

Word about these developments upsets Frontex HQ. If the reliability of EU’s Frontex troops is suspect, Athens may obtain EU funding for the wall after all. Now it seems better to suggest the severed head came from a migrant, Agent Evangelos is told, and if not it must belong to a people smuggler.

Well into the narration, The Greek Wall switches for a time to the point of view of Nikos Strom, a German-Greek man who has a plan for erecting the wall that would cost half the amount the Greek government is proposing. The officials in charge want the high-priced version, however, and the whiff of corruption is in the air. The authorities urgently want to find Strom, and he goes on the run.

The fate of Evangelos, Strom, and the prostitute Polina effectively demonstrate the widespread social and political impact of the migrant crisis in Europe, which extends well beyond the hundreds of thousands of desperate refugees. Even more, it shows the inadequacy of political leaders’ responses to a complex and challenging situation.

If this mystery interests you, also see Jeffrey Siger’s An Agean April, which also begins with a murder on the frontier between Greece and Turkey.