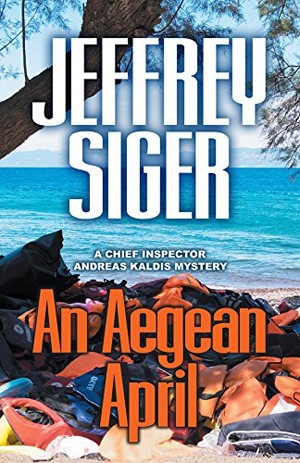 Written by Jeffery Siger — It is Easter time on the Greek Island of Lesvos and the shipping tycoon Mihalis Volandes is about to become the saviour of so many refugees who cross the straits from Turkey seeking freedom in Europe. He has a plan, the resources and the influence to cut the ruthless gangs of people traffickers out of the logistical chain. However, before he is able to present his proposal to the great and the good of Greece and the EU, he is sliced open from neck to navel with a samurai sword. A refugee called Ali Sera who was called to meet Volandes that very night is found at the scene splattered with blood, and it looks like an open-and-shut case for the coroner.

While on the one hand Jeffrey Siger’s ninth Andreas Kaldis mystery offers us a chance to escape the dreariness of winter to the sunny climes of Greece, on the other it pulls us into the hot topic of people trafficking and the refugee crisis. It’s a relevant subject, and the author is at pains to explain the complexities of the EU response, the problems Greece faces, and the amount of money involved in this illegal industry through some fairly hefty info dumps early in the book. However, he also offers a journey into a world of rich Byzantine architecture, rustic villages, rugged coastlines and colourful vegetation. Plus, there is such intense action in this book that it veers away from the police procedural approach seen in previous Kaldis outings and really gets the heart pounding and the pages turning.

This is thanks to a villain of almost superhuman capabilities. ‘Aryan’ is his alias and when the Turkish gang that contracted him to take out Volandes turn on him, they get a nasty surprise. Instead of disappearing into the night like most assassins would, he starts separating heads from bodies and makes a bid to become the boss of the people-trafficking operation. There are some excellent scenes set in Turkey in which Aryan more or less enslaves the local baddies – a nice reversal considering their occupation. But that’s not the only thing on his mind, because due to Kaldis’ efforts on the Greek side, he could be exposed. Eventually, he’ll head back to Lesvos to try to tie up the loose ends. Look out!

Kaldis and his team have been called in by Dana McLaughlin, the NGO worker who employed the suspect Ali Sera. Even though he’s running things from his office in the Central Police HQ in Athens, Kaldis is able to use his contacts and his experience to orchestrate the investigative groundwork on Lesvos, in Turkey, and in other parts of Greece. He soon doubts Sera’s guilt. However, it’s not until well into the story that he actually goes to the island to meet McLaughlin – who is unbelievably mistrusting of the police – and to try to trap the killer.

The author creates a complex story and handles it well. There are lots of characters, and there is plenty of intrigue between them, but everyone is introduced in a clear and easy to follow manner. Kaldis’ role is particularly interesting. He’s a whiter than white character, but not flawless, and we see him amongst family and friends almost as much as in his police role. For much of the story, he is away from the action, pulling strings via his mobile phone. The book becomes a many-headed hydra with interactions between the secondary characters driving the plot until very close to the end. It’s a good trick if you can pull it off and that’s what the author manages to do. Even if you’ve never read a Kaldis mystery before, you’ll slot right into the team.

Alongside the action, and the gathering tension in the sub-plots, the sense of place is strong in this novel. The author paints a distinct picture of the islands, so as a crime reader you can easily be an armchair tourist without it feeling too much like an EasyJet inflight magazine. There are a few moments when the ambition of the author gets the better of him – the explanation of McLaughlin’s distrust of the police comes at the wrong time and is pretty rushed – but overall the book holds together well for an enjoyable read. The finale, in which our deadly assassin Aryan attempts to stage multiple killings at a public event, provides an outstanding conclusion to a tightly packed 300-page thriller.